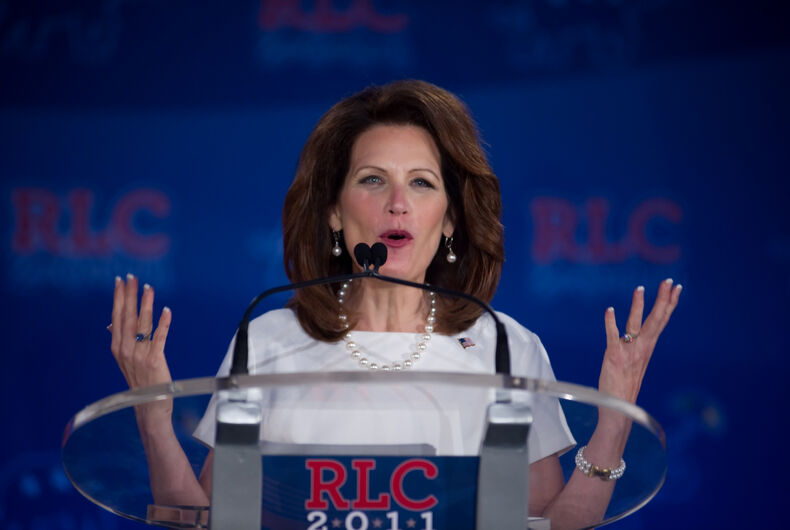 Former Rep. Michelle Bachmann (R-MN) was the forerunner of the Trump ascendency, throwing out far-right nonsense along with ridiculous claims about immigrants, LGBTQ people, and Democrats. After leaving office, she’s become a leading spokesperson for the Christian Taliban and COVID conspiracy theories, including opposition to the COVID-19 vaccines.

And while she’s “struggling with COVID pretty severely” after refusing to get vaccinated, she’s still pushing her nonsense on far-right podcasts even if she’s too ill to appear on camera.

Bachmann was regularly mocked by the mainstream but was embraced by the folks who would go on to become Trump supporters. After leaving office, she became a regular defender of the cruel philandering would-be dictator, praising his policies meant to keep the religious right in his corner.

That included the former president’s laissez-faire attitude toward the coronavirus, tendency to downplay the dangers of infection, and fondness for ridiculous “treatments” that won’t help prevent or treat the virus.

And Bachmann is committed to her schtick. She (didn’t) appear on a “Christian prayer call” over Zoom on Sunday night to tout wild conspiracy theories about the government, COVID research, and vaccines.

But when it came time for her to make her big appearance, things took a decidedly darker turn.

“I want to thank you for appreciating that I can’t have my camera on tonight,” Bachmann told the host. “I’ve been struggling with COVID pretty severely lately and I’m just not suitable for cameras. So thank you so much for just letting me speak and then I’ll hand things off.”

She has previously claimed that vaccines are sacrilegious and COVID is God’s judgment on the United States for not being nice enough to Israel.

Michele Bachmann was on a prayer call last night and explained why she was unable to appear on camera: "I've been struggling with COVID pretty severely lately and I'm just not suitable for camera." https://t.co/p0ROX0zyaI pic.twitter.com/oDxOdJxwE5

How do I know if I’m bicurious?