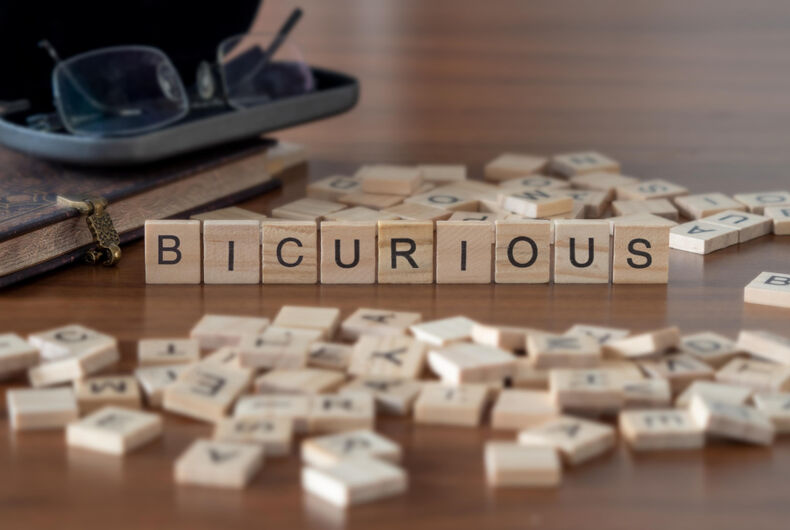 Sexuality is not as black-and-white as you may think. Some are lucky enough to have it all figured out. For others, however, it takes a little bit more introspection to understand romantic and sexual feelings towards more than one sex. People are highly complex creatures, which is why it’s not uncommon for people to have moments of doubt about their sexuality.

If you are currently in this period of experimenting, then you may be bicurious. It’s not unusual at all to be attracted to someone of your own gender or the other, but for many, the question is whether or not this attraction translates into wanting to do something more.

Keep reading to learn more about bi-curiosity, how it differs from bisexuality, and a few signs that this label may fit you.

What Does Bicurious Mean?

Bi-curiosity is essentially a phase in which you question your own perceived notions about attraction. During this phase, some bicurious people may experiment with other genders to determine whether they actually are bisexual. For some, however, it is more of an internal introspection during which they may just sit and evaluate what it is they really want from their sexual experiences.

Desiring sexual relationships other than what you have believed yourself to desire is nothing to be ashamed of. Bi-curious folk deserve to be accepted as much as other groups within the LGBTQ community – there is even a bicurious flag designed specifically for this group.

look how pretty the bicurious flag is ☹️ pic.twitter.com/dBdWldyBqh

Is It The Same As Being Bisexual?

It is understandable that the term bisexual is often confused with bicurious. The definition of bicurious, however, has neither to do with sexual or gender identity. It differs in that it is more of a period of exploring – a sort of experimental pre-stage to figuring out your sexual identity. On the other hand, bisexual people are those who no longer doubt their attraction to more than one gender.

Basically, the key difference between bisexuality and bi-curiosity is the verdict following the experimentation and/or introspection. Perhaps you come across someone of the other or the same sex that you are attracted to. You start to ask yourself things like: am I bisexual or am I just attracted to their personality regardless of gender? Is this just a passing phase or could this repeat with another person?

Eventually, you will realize one of two things: that sexual attraction to the other gender is just a passing feeling and that you were right about your initial sexual orientation, or your attraction is real and you do feel drawn to other gender/s. If the verdict is the latter, then that is when you are bisexual.

For some, bi-curiosity lasts for only a short period of time and then eventually dissipates. For others, it could last months, even years, until they come to a conclusion about their sexual identity.

Issues With The Term Bicurious

The term bicurious is a useful label for both straight and gay folk who may be in doubt about their sexuality. However, there is some criticism about its usage. In particular, it can be used to intentionally erase the struggles and sexual identity of bisexuals.

There has been a long-standing debate in the bisexual community with regard to the term. Those who identify as gay and straight have suggested that bisexuality is essentially the same as being bicurious, meaning that bisexual folks are still on the fence – despite clearly identifying as such and having no doubts they are attracted to more than one gender. This contention stems from the idea that every person will eventually settle for a singular gender they will be attracted to indefinitely (i.e. monosexuality).

How To Use The Term Bicurious

Even when someone who uses the term means well, it could potentially feed into bisexual erasure. If you are a gay or straight person feeling attracted to the other gender, some may argue that you are actually bisexual.

However, sexuality is not as straightforward as many claim – it’s never as simple as an attraction to the same sex or the other. The level of attraction towards the sexes is also not necessarily an even split for bisexuals. Some people will find themselves more attracted to women than men, for example. However, this does not make them any less bisexual.

The key focus of the term bicurious is the fact that it is a period of discovery. It is not meant to be used as a sexual identity, as this can encourage the harmful stereotype that bisexuals are just plain indecisive.

Aside from potentially harming the community, it can also be detrimental to your own self-discovery. When you box yourself into this category, you may not feel as free to explore relationships as you might if you labeled yourself as bisexual. It’s not uncommon for those in doubt to hesitate when getting too deep into a relationship so as not to “fully convert” to being a bisexual.

You Looked Up “Am I Bicurious” On Google

This is a pretty obvious sign that you’re bicurious. You’ve likely asked yourself this question in your head after seeing a person you feel strangely drawn towards. Perhaps you don’t feel comfortable sharing and asking someone else for advice, so you do what anyone with access to the internet does: you ask Google.

For some bisexuals, the attraction they feel towards both genders just makes sense. As soon as they find themselves drawn to the other gender, it just clicks and they accept it. You can call them lucky, but it can also be largely situational. For others, it requires much more thought, especially when the initial attraction sparks strong conflicting feelings.

Thoughts Relating To Bi-Curiosity Are Constantly Plaguing Your Mind

Anyone who is comfortable with themselves can say a person is attractive, whether their gender is the one they are attracted to. When this happens, sometimes it’s just a fleeting thought. At other times, it stays long enough for you to start questioning why this thought has outstayed its welcome in your mind.

You Find Out You’re Bicurious: What Next?

If you’ve come to the conclusion that you’re bicurious, make sure you give yourself some space. Any challenge to your own established notions of sexuality can be terrifying. Don’t let anyone make you feel like you need to figure things out right away – any attempt to force yourself into a category will be detrimental to your mental health. Keep in mind that this is your journey to make, and only you can decide on which feelings to pursue.

If you plan on telling your loved ones that you are bicurious, make sure that you have plans in place should things not go the way you want them to. Seek out a support network as well – you don’t have to go through this alone.

Bi-curiosity and bisexuality are not interchangeable, and it’s very important to know the distinction between the two. Understanding that it has more to do with it being a phase than a resolution to your sexuality will help you face any challenges should you start to doubt.

Although, it’s also just as important to practice empathy and be sensitive with the use of these labels. Coming to terms with your sexuality is an experience that involves not just yourself, but others around you as well.

Related: Bi women in relationships with lesbians more likely to be out, happier, & face more discrimination

Life
am I bicurious, am I bisexual, what does bicurious mean

DeSantis’ attack on Disney proves that incompetence is fundamental to Trumpism