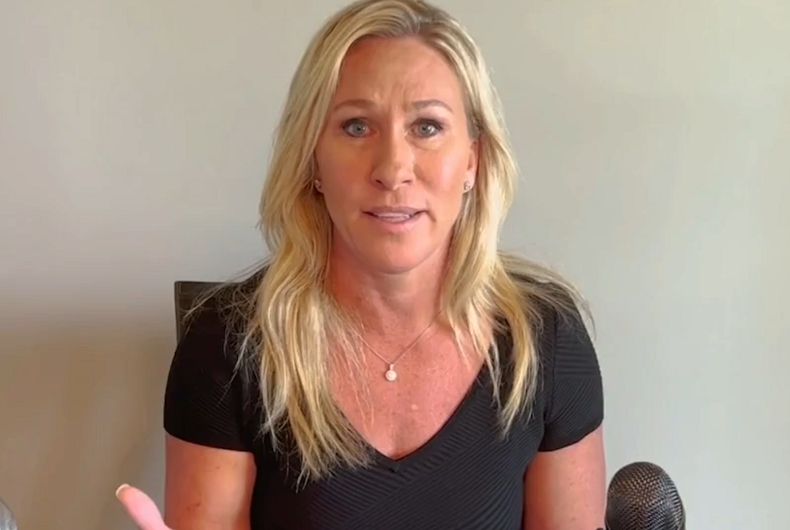 Rep. Marjorie Taylor Greene (R-GA) said that the Robb Elementary School shooter in Uvalde, Texas – who killed 19 children and two adults last week- was into cross-dressing, making her the second U.S. Congressmember to imply that the killer was transgender even though he was not.

“He clearly had a lot of mental issues going on, as was shown with him wearing eyeliner, cross-dressing, a lot of his language, being a loner,” she said during a Facebook broadcast.

Marge Greene claims that the murderer in Uvalde “clearly had a lot of mental issues going on, as was shown with him wearing eyeliner, cross-dressing…” pic.twitter.com/RHJBXVCZlY

Just after the shooting last week, Rep. Paul Gosar (R-AZ) said that the killer was transgender, repeating misinformation that was sweeping far-right and white nationalist websites.

The shooter was cisgender and a U.S. citizen.

Greene also said in her broadcast that the shooter couldn’t have afforded weapons by himself, a nod at the conspiracy theory that the school shooting was a false flag operation intended to build popular support for gun regulations.

“He must have really been saving up!” Greene said, wondering how he got “all that money” and saying the shooting had “very suspicious timing” because it happened just before the NRA convention in Houston.

Later in her broadcast, Greene played a clip from a social worker talking about how kids should be learning the basics of sexuality, like that some parts of their bodies are private. Greene then said that the social worker wants to “confuse children” and that being transgender “is new though.”

“But other than that, they just want you to think that all of a sudden the entire population is steadily turning gay or turning trans. Just generation, generation, generation… Probably in about four or five generations, no one will be straight anymore. Everyone will be either gay or trans or non-conforming or whatever the list of 50 or 60 different options there are.”

Louis Gohmert is leaving Congress. His replacement won’t be any better