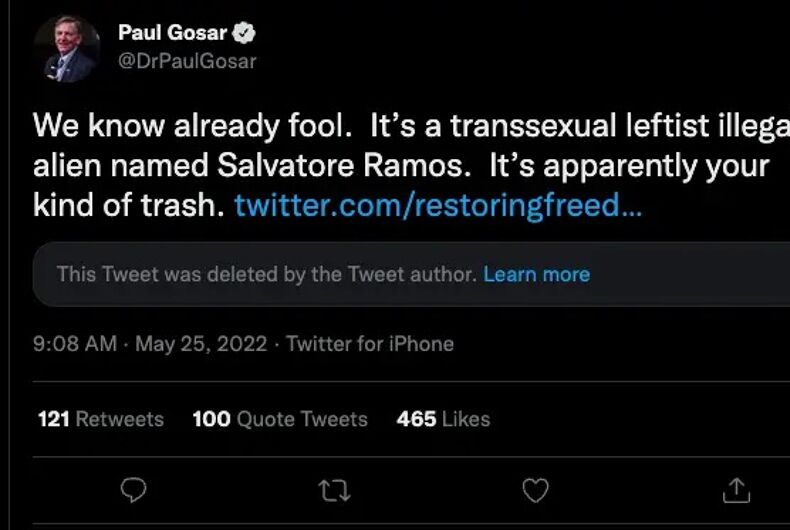 A transgender teen girl in Texas says that she was attacked by four men last night who seemed to reference the Uvalde elementary school shooting. Parts of the far-right internet yesterday were incorrectly saying that the alleged shooter – who killed at least 19 children and two adults – was transgender.

The shooter, who is already dead, was cisgender and a U.S. citizen.

A transgender 17-year-old girl only identified as “Tracey” in the media said that she was accosted by a group of four men outside a library in El Paso last night.

“Oh look, it has a dick,” one of the men said, Tracey recounted in an interview with the LA Blade.

“Yeah, you know they’re perverting kids instead of killing them,” she said one of the men said as he allegedly grabbed her arm and forced her to turn around and face him.

“Yeah, you know it was one of your sisters who killed those kids,” a different man allegedly said. “You’re a mental health freak.”

She was able to get away and she tried to report the incident to the El Paso Police, who refused to take an assault report. She latter called the Rainbow Youth Project to talk to a counselor, and that’s when she heard that conservatives were blaming the Ulvade school shooting on transgender people.

The Rainbow Youth Project said that they tried calling The El Paso Police Department about the alleged assault, but they couldn’t get the police to take a report either.

Tracey also said that she is currently living in a halfway house after her parents kicked her out of their home because of their transphobia. She used to visit a community clinic to talk to a counselor, but they refuse to see her now since Gov. Greg Abbott ordered child abuse investigations into adults who support transgender youth. While the order doesn’t specifically apply to counselors, “the clinic isn’t taking any chances.”