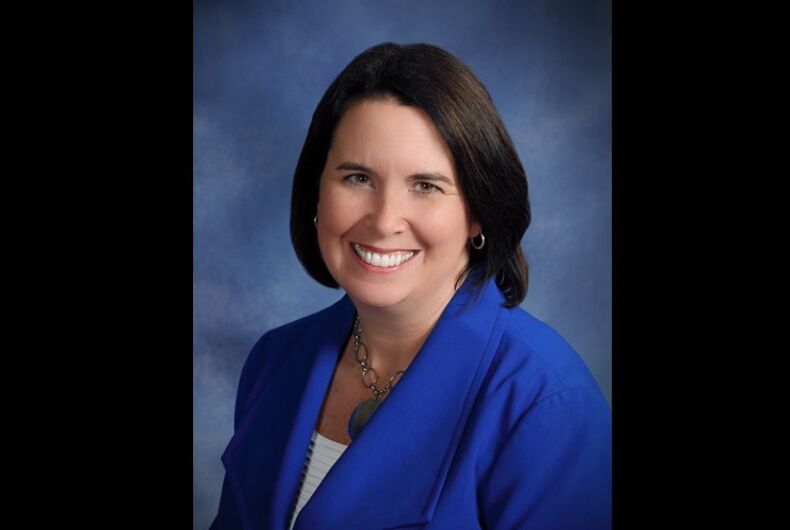 Republican Florida state Sen. Kelli Stargel is running for Congress. She’s also the “worst mom ever,” according to her daughter.

Hannah Stargel, who is bisexual, says she expected a reaction after posting a TikTok video outlining the “family values” candidate’s less-than-stellar performance as a parent, but she didn’t expect it to go viral.

State Sen. Stargel is behind several of the state’s most extreme anti-choice and anti-LGBTQ legislation. One of the bills she championed would ban abortions after 15 weeks and contains no exceptions for rape or incest. Another of her bills would have required girls to have their genitals examined and submit to a DNA test in order to play school sports.

After a national outcry, Stargel acknowledged that it might pose problems for the “inherent dignity of each person.” She pulled the bill from consideration but brought it back as an amendment to another unrelated bill in what Hannah Stargel claims is a sneaky maneuver her parents would normally condemn. John Stargel is a former state representative.

The family members are not on speaking terms after she came out to her rightwing parents, but she says the abuse was obvious her entire life – and it disqualifies her mother from claiming the moral high ground.

The state senator “doesn’t really have a right to tell you or anybody else who can and can’t be a mother,” she says in the video. “She wasn’t even a mother to her own children.”

“This is the same woman who wouldn’t feed me if I didn’t go to church on Sunday,” she continued. “After numerous years of telling me I was hard to love, putting me through numerous years of neglect, putting politics before everything else, and, honestly, just being a horrible horrible person to look up to, is this really someone you want up in D.C. passing laws about you and your children?”

Hannah Stargel’s sister Laura also publicly came out in opposition to their mother’s legislation in an op-ed published in the Orlando Sentinel.

She insisted at the end of the video that she would do everything in her power to “make sure Kelli Stargel does not become the next Congresswoman from Florida.”