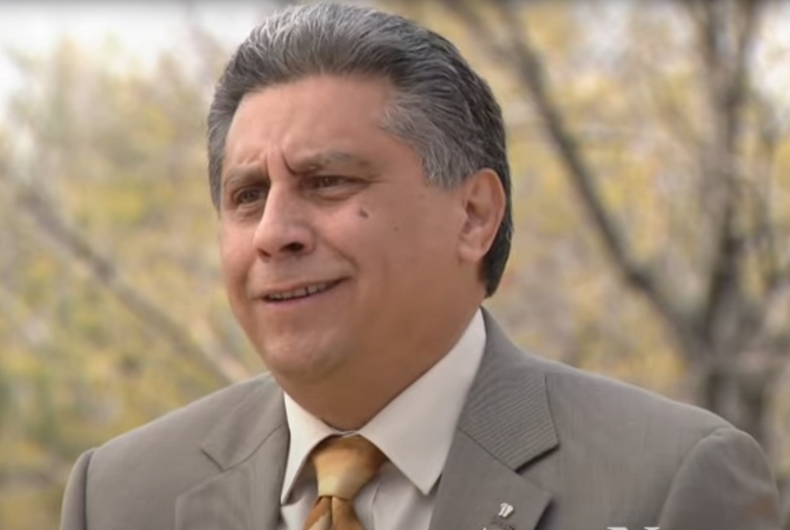 Colorado Republican gubernatorial candidate and former Mayor Greg Lopez – a staunch opponent of abortion – was confronted by a journalist about the time he pled guilty to pushing his wife on the ground and kicking her when she was six months pregnant.

In the interview with Kyle Clark of 9News, Lopez said that he wants to “undo” a state law in Colorado that protects the right to an abortion.

“I do believe we need to undo it, but here’s why,” Lopez said. “It says that there is no life in the womb of a female. And I think that’s wrong.”

“When I read that language, it really gives me really pause for concern, as to did we lose our moral compass here in Colorado?”

He then said that he would sign an abortion ban if elected.

“You have said specifically on this issue that you are pro-life, without exceptions for rape and incest and life or health of the mother,” Clark said. “Additionally, in 1993, you were arrested for violently assaulting your then-pregnant wife. Some people might see those two things at odds, but they both involve you exerting control over a woman’s body. Is that what Coloradans want from their governor?”

Lopez insisted that “it wasn’t a violent situation” and that “we were both arrested for assault.”

Instead of getting off-track, Clark asked: “Do Coloradans want somebody who has a history of both in word and in action of controlling the bodies of women?”

“There’s only been one perfect man that’s walked this earth, and we nailed him to the cross,” Lopez responded, referring to Jesus. “I’m not a perfect man. I made my mistakes, but I’ve learned from them.”

“You don’t see it as an issue of control over women’s bodies?” Clark asked.

Greg and Lisa Lopez are still married, three decades later. Greg Lopez even made a video with Lisa Lopez for his campaign in 2018 where they discussed the domestic violence and he said, “It made us stronger in our marriage.”

“The test of love, the test of character, is how you come out of it,” Lopez said in the video, blaming alcohol for his behavior: “I had been drinking that evening.”

According to the Durango Herald, Greg Lopez was accused of pushing his wife to the floor and kicking her when she was six months pregnant in 1993. The police report said that she had hit him on the top of his head first. Both were arrested and pled guilty to a charge of harassment.

Lopez has also been accused of driving under the influence and improperly influencing the Small Business Administration.

The Colorado primaries started in March and end on June 28 and are conducted largely by mail.