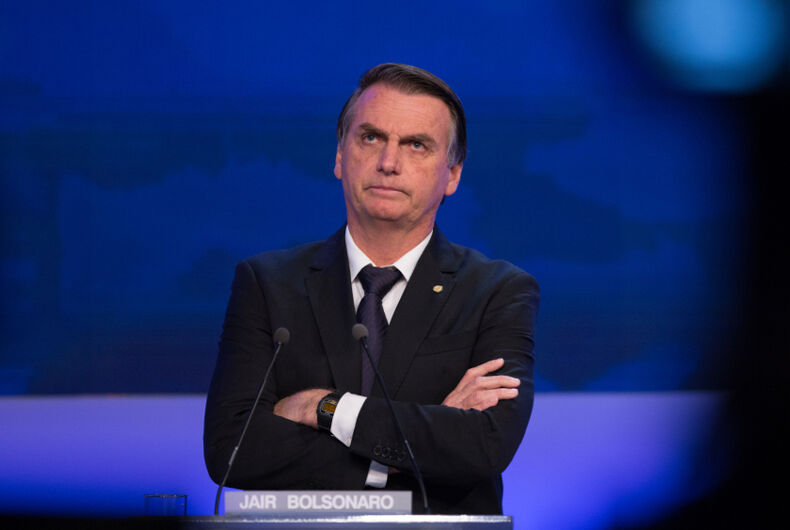 Brazil’s anti-LGBTQ President Jair Bolsonaro claimed that the COVID-19 vaccines cause AIDS in a video posted to social media, which Facebook and other platforms deleted days later because it violated their policies against coronavirus misinformation.

Last Thursday, Bolsonaro claimed in one of his weekly live broadcasts to have seen reports from the U.K. that “suggest that people who are fully vaccinated against COVID-19 are developing Acquired Immune Deficiency Syndrome much faster than expected.”

“I recommend you read the article,” he added. “I’m not going to read it here, because I don’t want to lose my Facebook live video.”

Bolsonaro didn’t say where the article could be found. The AFP said that the British government has denied that any such report exists, and the Brazilian Society of Infectious Disease Specialists said there is no connection between any of the vaccines and HIV or AIDS.

By Sunday night, Facebook and Instagram had finally removed the video from their platforms. YouTube said that it removed the video on Monday and local media reports that Bolsonaro’s channel has been suspended for seven days.

“Our policies don’t allow claims that COVID-19 vaccines kill or seriously harm people,” Facebook said in a statement. The social media platform has not said why it took three days to remove the video.

Bolsonaro has a long history both opposing LGBTQ equality and measures to fight the coronavirus pandemic like vaccines. Earlier this year, he said that there is no legal recourse for people to sue Pfizer for vaccine side effects, implying that there are serious side effects to the vaccines. He also joked that the vaccines cause women to grow beards and men’s voices to become high-pitched.

YouTube removed a video Bolsonaro made earlier this year where he recommended hydroxychloroquine and ivermectin to treat COVID-19, despite scientific research showing that the drugs are not effective in treating the virus.

Bolsonaro tested positive for COVID-19 this past July and has said that he will not get vaccinated, even though public health officials recommend that even people who have gotten COVID-19 get vaccinated since the vaccines reduce a person’s chance of getting COVID-19 again.

“Why take the vaccine? To have antibodies, isn’t that right? My antibody levels are way up high,” he said last month. “After everybody in Brazil is vaccinated, I’ll decide.”

It’s not known if he is actually unvaccinated or if he’s just trying to appeal to anti-vaccine supporters.

In 2013, Bolsonaro proclaimed, “Yes, I am homophobic — and very proud of it.” He has said that he’d rather his son die in an accident than be gay. He has advocated that parents should beat being gay out of their children. In 2017, he said that he’d never have a gay son because his family has “a good education.” He also promised to ban schools from mentioning LGBTQ people because it’s a threat to the country’s Christian values.  A 2019 U.S. petition against Bolsonaro called him a “well-documented bigot.”

Presidential elections are scheduled for next year in Brazil. Bolsonaro has not responded to requests for comment about his claim that vaccines cause AIDS.

This ad is being called the “Gayest Commercial of 2021”