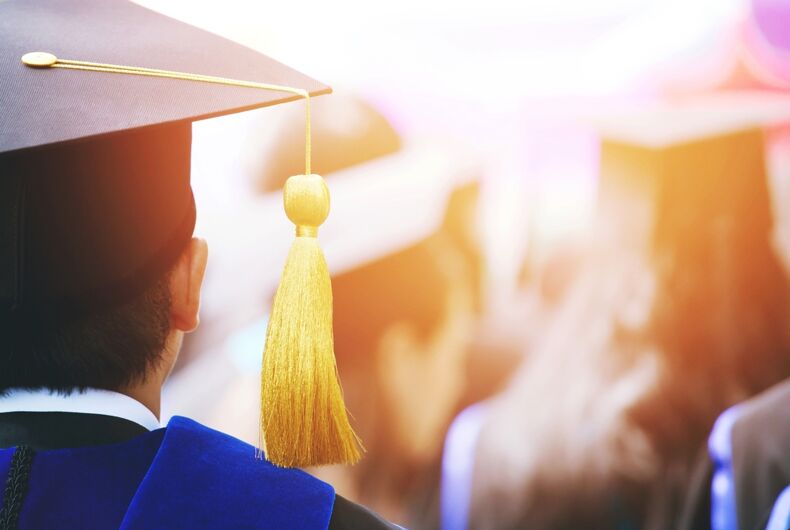 When William Harless decided to come out, he knew when he would do it.

While he’d been considering coming out since he attended middle school in West Virginia, the high school senior realized that he needed to be loud and proud as graduation approached. So the Florida senior waved a Pride flag as he strode the stage to get his diploma in defiance of the state’s Don’t Say Gay law.

Related: You need to watch this episode of Queer Eye immediately to restore your hope in 2022

“It feels amazing, like a weight has been taken off my shoulders,” said Harless. “I have really been able to stay true to myself because I no longer feel like I don’t need to hide a part of myself. I feel genuinely free.”

Graduation ceremonies have become a space where several students have come out or made stands on behalf of LGBTQ rights. But they’ve also become a culture war battleground with young adults being used as targets.

Zander Moricz, a high school senior in Florida who has filed a lawsuit against the state’s Don’t Say Gay law, was told by school officials not to use his graduation speech to mention his homosexuality or to criticize the law. Instead, he delivered a thinly veiled graduation speech using his curly hair as an analogy for his sexual identity.

Moricz — the senior class president of Pine View School for the Gifted in Osprey, Florida — said that before his graduation, his school’s principal, Stephen Covert, threatened to cut his microphone if he discussed being gay or the law. Such remarks would be “polarizing and not school appropriate.”

“It was like a sledgehammer to the face,” Moricz said. “I could not comprehend it because it felt so backwards. I’m told that my human rights are controversial and therefore not appropriate for a school setting… for my speech at my school graduation.”

An Indiana transgender teen who almost decided not to go to his own graduation ceremony because he was going to be deadnamed was able to get his high school to reverse its decision at the last minute. Bradley Curry, 18, has been out as transgender since he was 12-years-old and has gone by his first name at school ever since.

Curry wrote about the situation on social media and got support from people all over the country; he and his father submitted a written request to Warrick County School Corporation superintendent Todd Lambert to overturn the principal’s decision.

“The school has agreed to meet our requests,” he said. “Graduation is tomorrow.”

While the program for the graduation ceremony had Bradley’s deadname, the announcer said his actual name.

Pastor tells city council that gay people should be slaughtered

7 things that surprised me about Athens