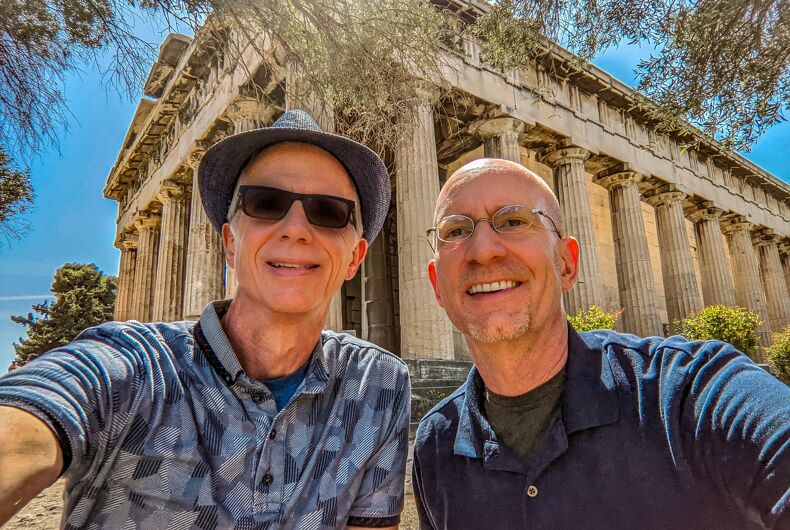 So remarkable! The temple behind us is fairly nice too.Photo: Michael Jensen

My husband and I just spent a month living in Athens, Greece. As always in our travels, we came to the city with certain preconceptions about what it would be like. Many of those turned out to be true. The Acropolis is exactly as breathtaking as advertised. And, well, olives.

But also just like always, we had some of our preconceptions upended and learned a number of unexpected things about our new temporary home.

Related: Discovery+ is opening the Book of Queer & LGBTQ celebrities couldn’t be prouder

Like almost every European city we’ve visited, Athens has loads of parks. That’s a necessity in Europe where small personal living spaces are offset by glorious public spaces.

But what I hadn’t expected in Athens was that so many of those parks would be vertical.

Athens is famous for having seven hills. And every one of them is a park of some kind.

The most famous is, of course, the Acropolis (which is the name for the rocky hill and also the entire ancient complex that covers its top). This is home to the Parthenon (the famous temple that is the centerpiece of the complex).

Next to the Acropolis (but overlooked by far too many visitors, IMHO) is Filopappou Hill, which offers fantastic views of the Parthenon.

Meanwhile, across the city is Lycabettus Hill, which, at 277 meters tall, is the city’s highest point. On top, you’ll find food for the body and soul — a restaurant and a church — and stunning views of the entire city.

We had the great fortune to live at the foot of Strefi Hill (which isn’t one of Athens’ seven most famous hills). And while it doesn’t rise as high as Lycabettus, it still gave us an amazing place to watch the sun rise and set over this ancient city.

I knew oranges grew in Greece, but I didn’t expect to find orange trees lining the streets of very urban, very gritty Athens. And we arrived at the perfect time, because they blossom from April into May, exactly when we were there.

There is nothing like opening your apartment window and having the smell of orange blossoms flood inside. The smell isn’t “orange” like when you peel an orange, but rather a fresh, sweet, very smooth floral smell.

Fun fact: some species of orange trees take so long for the fruit to ripen that they start blossoming even when there are still oranges on the tree. That’s the case in Athens, and it makes for a lovely combination of the visual and the olfactory.

In fact, we could literally reach outside the windows of our apartment and pick oranges off the trees.

Alas, this is a species of orange tree that is used in urban settings and is for decorative purposes only: the oranges are far too bitter to eat. Although they might be sour enough to substitute for lemons in your cooking!

The Temple of Hephaestus

At the risk of sounding like a total idiot, coming to Athens, I was jazzed to see the many ancient buildings in the Acropolis complex. But I’d barely heard of the Temple of Hephaestus or the Agora of Athens (which is Ancient Greece’s public gathering place, sort of like the Roman Forum in Rome). This is all located off to one side below the Acropolis.

One afternoon while snapping pics of the Acropolis, I caught sight of the Temple of Hephaestus and eventually Brent and I found our way there (no thanks to Google Maps, which brought us into a fenced cemetery very near the temple but very far from the ticket booth to get inside the complex).

But the Temple of Hephaestus, which dates back to 415 BC, is the absolute highlight. It’s the best-preserved ancient temple in Greece — and was even still in use as a church until 1834 (which is part of the reason why it’s so well-preserved).

Sitting next to the temple, looking out over the tree-filled Agora and up at the Parthenon, felt a bit like we’d hopped in a time machine and were back in Ancient Greece.

Brent thought the temple was the single most magical thing we saw in Athens, in part because it was so unexpected.

So Many Dogs! But Where Are The Cats?

Brent loves cats (the understatement of the century). So when we told folks that Athens was our next stop, everyone said he would be in cat heaven.

We saw cats, but mostly only around the Acropolis (completely ignoring its majesty, naturally, while displaying plenty of their own).

Meanwhile, I saw many, many dogs.

Alas, while Greeks love their dogs, they don’t always love picking up after them (at least compared with other European countries).

What accounts for the deficit of expected cats?

Perhaps it’s merely a matter of expectations after having lived in Istanbul, Turkey — where cats truly rule. Or maybe for some unknown reason there just are fewer cats in Athens these days.

As for dogs, Ancient Greeks loved dogs too, and sometimes even buried them with treats for the afterlife. Clearly, the affection has persisted.

Our visit to Athens got off to a bad start when our cab driver dropped us off at the wrong end of Kallidromiou Street. To reach our apartment, we had to fight our way through six dense blocks of merchants and shoppers in the Saturday farmers’ market.

But once we’d settled in, and on every Saturday to follow during our time in Athens, I discovered the majesty of this incredible market, taking in its amazing selection of fresh olives, piles of ripe tomatoes, heaps of oranges, mounds of glistening strawberries, fresh seafood, eggs, and more.

Apart from the luscious wares, the market’s location is also quite picturesque. It rises up Kallidromiou Street until it ends with a panoramic view of Lycabettus Hill.

Locals aren’t thrilled that expats and tourists are rapidly discovering this hidden gem of a market and probably hate articles like this. But shopping here was still one of my favorite things to do in Athens.

Brent and I have lived in many countries where you can’t flush toilet paper (and for the record, the vast majority of the world doesn’t flush their toilet paper). Instead, toilet paper is placed in a sealed bin next to the toilet and, well, this is already TMI.

Why can’t you flush it? Essentially, it’s an older plumbing system and the pipes are so narrow that they clog very easily.

But we figured Athens, a modern European country, would have a modern sewage system like all of Western Europe.

But that’s the thing.

It’s easy to think of Greece as a “western” European country: it was an Allied power during World War II, joined NATO all the way back in 1952, and is widely considered the cradle of Western Civilization.

But in other ways, it’s more a part of Eastern Europe. Where you’re far more likely to have “older” plumbing systems in which you can’t flush toilet paper.

And the situation is even more complicated in Greece because any time you do an underground construction project, you risk coming across ancient ruins, which can massively increase costs. This is why Athens’ subway system is limited as well.

If and when they ever do update the sewage system, it will be very difficult and expensive.

Toilet paper aside, another thing that surprised me is the fact that…

Greece is a Balkan Country

I did know this intellectually, of course. Greece is literally on the Balkan Peninsula. But again, I still thought of it as basically a Western European country.

But here are the countries that share its border: Albania, Bulgaria, North Macedonia, and Türkiye (which is how “Turkey” now wants to be written). During the Cold War, Greece was only accessible to the West by air and sea.

Greek is one of the parent languages for the Slavic tongues (and share many letters in their alphabets).

And while much of Western Europe is Catholic, Greece, like most of Eastern Europe, subscribes mostly to Eastern Orthodox Christianity.

Western Europe has spent most of the last century in opposition to the Soviet Union and now Russia. But Greece, like many Balkan countries, has traditionally been more concerned about Türkiye, home of the Ottoman Empire, which used to control Greece, and likes to remind Greeks of that fact.

Greece also feels like a Balkan country because Greeks seemed to be a bit pessimistic and guarded, with a strong anti-authority aura about them. Perhaps that’s to be expected in a country with a long history of warfare: the country has had well over a dozen conflicts since gaining independence in 1830, and a great deal of internal political upheaval as well.

This isn’t to say Greece is exactly like other Balkan or Eastern European countries. In some ways, it also resembles “Mediterranean” countries like Italy and Malta, in its wonderful cuisine, and also the fact that people can be quite voluble. And like Italians, Greeks like to strike, take lots of holidays, and have a bureaucracy that can be absolutely maddening.

All in all, it’s a fascinating hybrid of east and west. Which wasn’t quite what I expected.