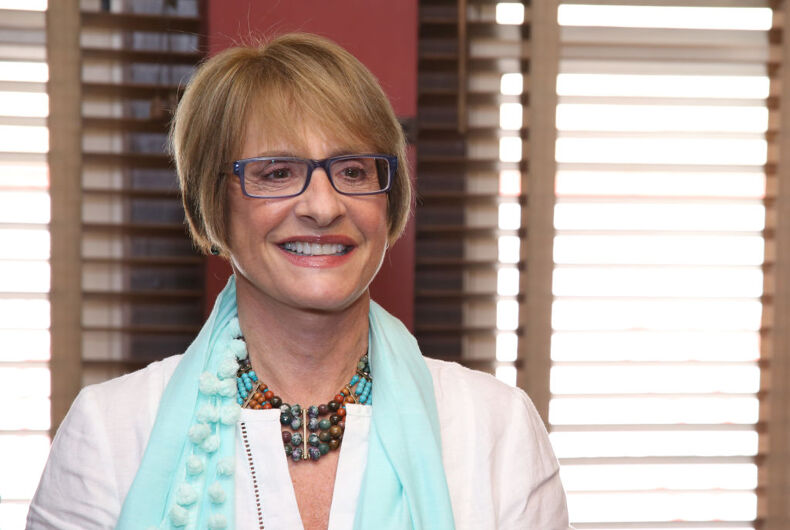 “Put your mask over your nose,” LuPone said in video captured during a talkback featuring the female cast members of Company. “That’s why you’re in the theater. That is the rule.”

Related: Enraged anti-masker screams he’ll “beat your f***in mask off” as he is carried out of store by son

“If you don’t wanna follow the rule, get the f**k out!” a clearly frustrated LuPone shouted at the anti-maskers.

“Who do you think you are if you do not respect the people that are sitting around you?” she said.

“I pay your salary!” one of the anti-maskers shouted back at Patti LuPone.

“You pay my salary?” LuPone responded, incredulous. “Bulls**t. [Producer] Chris Harper pays my salary. Who do you think you are? Just put your mask over your nose.”

According to playwright Sarah Jae Leiber, the anti-maskers were kicked out of the theater and LuPone left the stage.

“Over the course of her storied career, Patti has always had an unshakable bond with the audience, and she takes their role as seriously as her own,” he said. “She is also a fierce advocate for the entire theatrical workforce. We stand with Patti and support her efforts to keep our entire community — from patrons to ushers, cast to stage crew — safe and healthy so we can keep Broadway open.”

Patti LuPone putting an anti-masker in their place at a talkback after the show. Just follow the fucking rules and keep the performers safe pic.twitter.com/XWnkDxyoGo

patti just called out two people who weren’t wearing their masks during this Company talkback. she asked nicely, they were horribly fucking rude to her (imagine saying “we pay your salary” to patti fucking lupone), they got kicked out and she walked offstage

What happens when a transgender man needs Plan B?