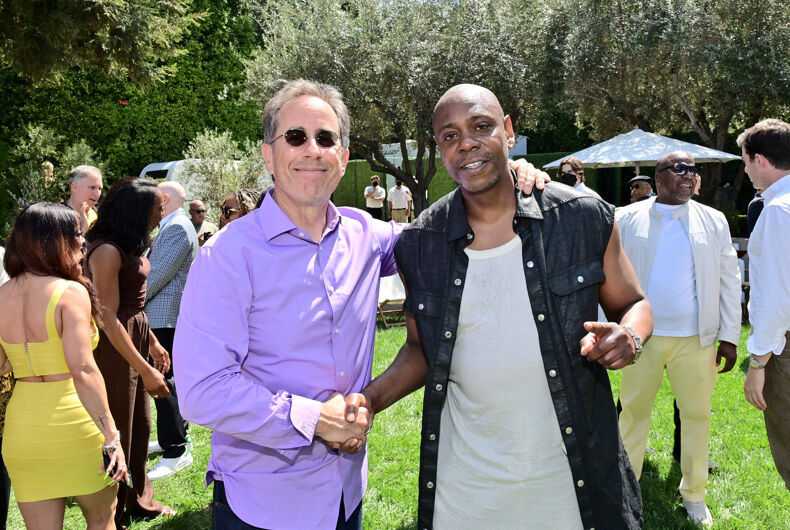 Isaiah Lee, the bisexual man who attacked comedian Dave Chappelle on stage, says he was “triggered” by jokes about homelessness and the LGBTQ community. Lee had a fake gun that concealed a knife when he ran on stage.

Related: Out SNL actor Kate McKinnon ends 10 seasons on show while being abducted by aliens

Chappelle made several anti-transgender and anti-gay jokes during his Netflix special The Closer, including announcing that he’s a trans-exclusionary radical feminist (TERF), ranting about trans women’s genitalia, and joking about beating up gay men and lesbians.

He continued the theme, mocking transgender people and the homeless during the show. Another comedian made crass comments about pedophilia, a common topic among conservatives and anti-transgender activists lately.

Lee said he didn’t intend to hurt Chappelle during an interview given from jail. The comedian was performing a show at the Hollywood Bowl for the “Netflix is a Joke” comedy festival when Lee ran on stage.

Lee alleges that Chappelle asked him backstage why he had attacked.

“I told him my mother and grandmother, who fought for his civil rights to be able to speak, would be upset at the things he said,” Lee said.

“Now your story will die with you, son,” he alleges Chappelle responded.

“But he’s wrong,” he told the reporter. “I’m sitting here talking to you about it.”

After security intervened and Chappelle had spoken to Lee, he came back on stage and claimed, “It was a trans man.” While the crowd laughed, Lee is not transgender.

While he only faces misdemeanor charges for interrupting Chappelle’s act, Lee is looking at more serious charges for stabbing a former roommate. The victim identified Lee, who has mental health issues, after seeing the viral video of the attack on Chappelle.

Netflix CEO Ted Sarandos said that they would not remove the special because it was popular. In the midst of employee protests, Netflix fired a pregnant, Black, transgender worker and said it was because they leaked metrics to the media. They also suspended another transgender employee who was speaking out against the special, saying it was because she tried to attend a meeting she wasn’t supposed to attend. The employee ultimately resigned.

Chappelle has complained about being “canceled” in the months since, all while his comedy specials stay on Netflix and he continues to perform gigs just like before.

Alex Jones spouts off with strangest conspiracy theory yet