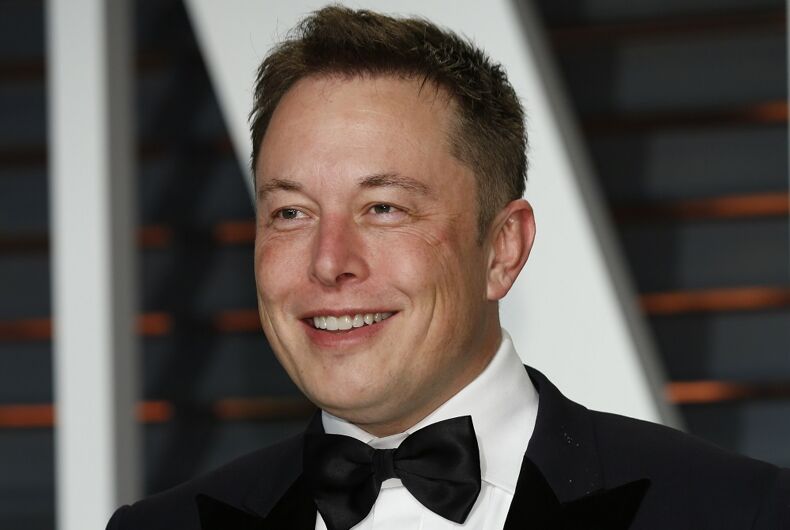 His tweets suggest that he probably won’t shield LGBTQ Twitter users from hate speech and harassment. If he fails to do so, it will harm trans and gender non-conforming people the most; especially amid the recent wave of Republican legislation targeting trans youth.

LGBTQ activists have long complained about Twitter’s inconsistent enforcement of its own anti-hate speech and misinformation policies. But Musk must choose: He can either moderate tweets to help Twitter remain a critical lifeline for LGBTQ people or he can allow Twitter to become a conspiracy-ridden “no rules” cesspool that breeds hatred and violence.

Musk posted an image that read, “when you put he/him ur bio.” The words hovered over a picture of a British colonial soldier rubbing blood onto his face and wearing a hat that has “I love to oppress” sewed into its brim.

“I absolutely support trans, but all these pronouns are an esthetic nightmare”, Musk wrote, misspelling aesthetic.

He didn’t specify which pronouns most offend his artistic sensibilities.

I absolutely support trans, but all these pronouns are an esthetic nightmare

In response, his then romantic partner, pop musician Grimes, posted (and later deleted) a response tweet which said, “I love you but please turn off ur phone or give me a [call]. I cannot support hate. Please stop this. I know this isn’t your heart.”

Also responding to Musk’s tweet, Chasten Buttigieg, husband of Transportation Secretary Pete Buttigieg, wrote, “I hear your frustration, sweetie. See me after class and we can go over the worksheet again.”

Musk posted an image of a person holding up a Ukrainian flag in front of numerous queer Pride flags. The black and brown colored ring surrounding the person says, “I support the current thing.”

The illustration suggests that proclaiming LGBTQ identity, supporting Ukraine amid Russia’s invasion, and including Black and brown people into social justice movements are all fads.

Musk posted a digitally altered image of what looks like a pregnant man sitting under the words “Netflix waiting for the war to end to make a movie about a black ukraine guy falls in love with a transgender russian soldier.”

He published this tweet soon after news broke of his ex-partner Grimes’s rumored relationship with military whistleblower Chelsea Manning, a transgender woman.

In a body-shaming tweet, Musk posted an image of Microsoft founder Bill Gates alongside an emoji of a pregnant man. In both pictures, the men had pronounced bellies hiding under their blue shirts.

Musk’s caption read, “in case u need to lose a boner fast.”

in case u need to lose a boner fast pic.twitter.com/fcHiaXKCJi

Pic of the Week: No money? No honey.