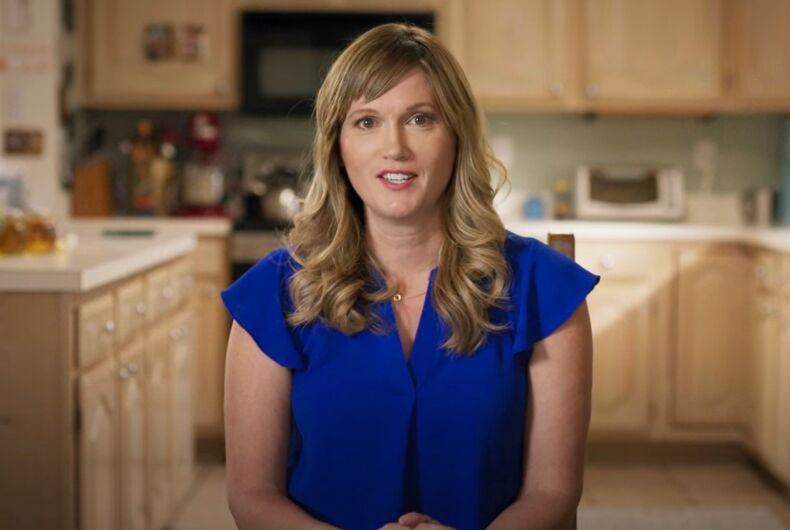 Amber Briggle, the mother of a trans son and a past LGBTQ Nation Hero nominee, first made waves last year for her powerful testimony opposing a brutal anti-trans bill in Texas. She has continued to speak out for trans youth ever since.

In conjunction with GLAAD, she recently released a PSA titled “Protect Our Families” that will air nationwide to promote protecting trans youth from these attacks.

“Max loves to do backflips. Max loves to play his ukulele. Max loves to just be a kid and just be himself,” Briggle says in the PSA, which is accompanied by videos of Max and his family having fun together.

“If you’ve never met a transgender child before,” Briggle continues, “what I want you to know is that that child is no different than yours. They have the same hopes and dreams and deserve the same equality as your child does.”

She then took direct aim at the politicians “trying to tear my family apart.”

“Trans kids don’t have a political agenda. They are just kids. They just want to be left alone.” She ended by declaring she would never stop fighting for her son, and invited viewers to stand with her.

Disney, Paramount, WarnerMedia, and ComcastNBCUniversal are all reportedly donating air time to the video.

During her viral testimony last year, Briggle told lawmakers, “I promise, I will call every single one of you every time a transgender child dies from suicide to remind you that their lives could have been saved, but you chose not to.”

The bill she spoke out against would have redefined child abuse to include parents who support their transgender children.

Ever since, Briggle has remained in the public eye as one of the fiercest defenders of trans youth. She even hosted Texas’s anti-LGBTQ Attorney General Ken Paxton at her house for dinner in attempt to show him that her family was just like any other.

But Paxton has continued waging war against trans youth. In mid-February, he issued a non-binding opinion stating that gender-affirming health care for transgender youth is a form of child abuse. The following week, Gov. Greg Abbott (R) sent a letter to the Department of Family and Protective Services demanding that they investigate parents who provide gender-affirming medical care to their transgender children. A judge has issued a temporary injunction preventing these investigations from taking place, but Paxton has continued to fight it.