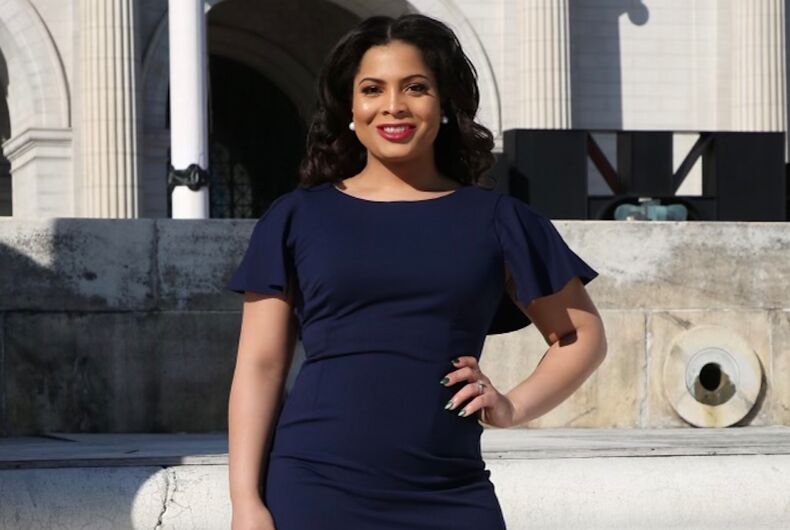 Running for Chicago’s Metropolitan Water Reclamation District (MWRD) Commission, she would be the first out trans woman of color elected in Chicago history, and she hopes her campaign will show young trans people that they can do anything.

“When folks see themselves recorded in the arc of history, they say, ‘I can be that too,” she told LGBTQ Nation. “For far too long, LGBTQ folks, particularly Black trans people, have been removed from the narrative…I want to show young people that you have the ability to make your dreams come true.”

Many don’t know a lot about the MWRD, but the role for which Brady-Davis is running is a crucial one.

The MWRD is tasked with protecting the city’s water source, Lake Michigan, as well as with stormwater management, wastewater treatment, and the health of other waterways. According to its website, its actions affect about 12.72 million people per day.

Brady-Davis was inspired to run for the position by out lesbian Debra Shore, who spent fifteen years as MWRD commissioner and was recently appointed by President Biden as a Regional EPA Administrator.

Such an exciting day! Thank you @VictoryFund for this endorsement. Representation now more than ever matters and I intend to make my community proud by becoming the first Black Trans Woman elected in Cook County. #preciousformwrd 🏳️‍⚧️🏳️‍🌈 https://t.co/QGsEccuor5

Brady-Davis is currently the Associate Regional Communications Director for the environmental organization Sierra Club. During her four years with the organization, She said she has witnessed the extent to which fossil fuels pollute the air and water.

“In particular, communities of color are most impacted by this pollution. My whole career has been rooted in advancing equity and justice issues.”

In addition to protecting Lake Michigan, Brady-Davis hopes to prioritize projects “that advance community resilience,” such as building playgrounds in communities of color, working with a diverse range of stakeholders to ensure communities are getting what they need, and increasing investments in renewable energy.

“Currently, the MWRD runs the reclamation system on fossil fuels. I think we have a great, unique opportunity to transition to clean energy.”

In a 5-4 ruling lead by the conservative majority The Supreme Court for now rules against the Clean Water Act allowing fossil fuel polluters a free pass to pollute our rivers, streams, and waterways. A disgrace. https://t.co/kuMj6Rjy5x

Brady-Davis has devoted her life to advocacy – from spending three years working with youth at the Center on Halsted (the city’s LGBTQ community center) to coordinating diversity recruitment initiatives at Columbia College Chicago.

As a a manager at Sierra Club, Brady-Davis hasn’t spent as much time on the ground as she used to, and she said the campaign has been an amazing reminder of “the power of grassroots.”

Brady-Davis officially filed to get on the ballot on March 14 and said she is “so proud” of what she and her team have accomplished thus far. But now, she said other Democrats are challenging the validity of some of her signatures.

“They’re trying to throw us off the ballot, and my question to them is, what are they afraid of?”

“Here in Cook County, there’s a philosophy that if you haven’t been sent for, there’s not a seat for you at the table, and I’m here to tell you I’m bringing the chair with me.”

Brady-Davis said she will continue fighting for the validity of her petitions and is confident she will be successful. Assuming that’s true, her primary will take place on June 28th during Chicago’s Pride season.

“I’m calling it our Pride primary…I feel like I’m standing on the shoulders of so many great trancestors who came before me, who wielded their voice and stepped up to serve.”