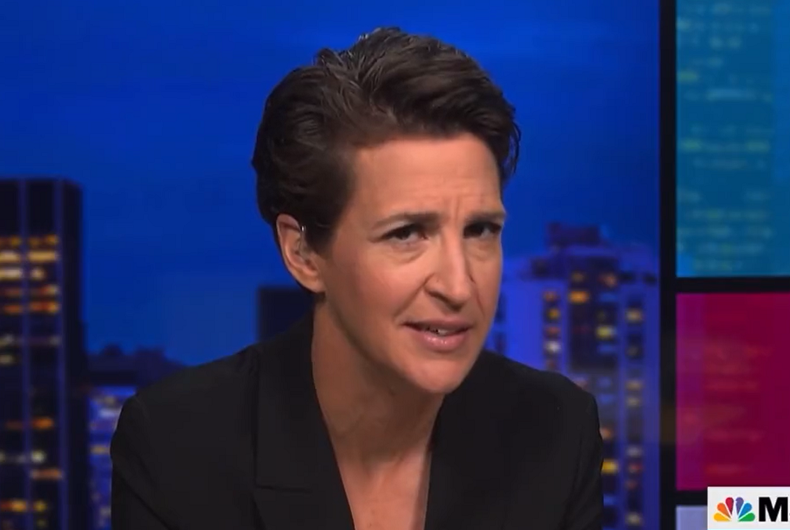 House Republican Minority Leader Kevin McCarthy (R-CA) could be facing calls to resign after out MSNBC host Rachel Maddow busted him saying in a recorded conversation that he believes that Donald Trump should resign in the days after the Capitol Insurrection, even though he denied that he ever said that and even called reporters liars for saying that he said that.

“Wow. McCarthy literally today said this was a lie and just a few hours later the tape with his voice from his mouth proves THAT was a lie. Incredible. [McCarthy] ought to be ashamed,” said Rep. Adam Kinzinger (R-IL). “Republicans, your leaders think you are dumb. Let’s be done with them.”

Related: Rachel Maddow says Donald Trump should face charges: “This is him confessing”

The story involves journalists Alexander Burns and Jonathan Martin of the New York Times, who will be releasing a book soon entitled This Will Not Pass.

They reported yesterday that both McCarthy and Senate Minority Leader Mitch McConnell (R-KY) told people around them that they “believed President Trump was responsible for inciting the deadly riot and vowed to drive him from politics. Mr. McCarthy went so far as to say he would push Mr. Trump to resign immediately: ‘I’ve had it with this guy.'”

Later in the day, McCarthy issued a statement denying it all, calling the New York Times reporting “totally wrong and false.”

“It comes as no surprise that the corporate media is obsessed with doing everything it can to further a liberal agenda,” he wrote.

Well, his denial turned out to be like “stepping on a rake,” in Times reporter Maggie Haberman’s words, because last night Maddow had a recording of a conversation between McCarthy and Rep. Liz Cheney (R-WY).

“The only discussion I would have with him [Trump] is that I think this will pass, and it would be my recommendation you should resign,” McCarthy can be heard saying in the recording with Cheney.

“That’s what Kevin McCarthy told other House Republicans on January 10, 2021, that he was going to call President Trump and tell him the impeachment was gonna pass and he needed to resign,” Maddow explained. “Mr. McCarthy flat out and categorically denied that today. He denied that he said he would tell Trump to resign.”

“Greene, Gosar and Jordan are licking their chops,” tweeted Lincoln Project co-founder Reed Galen, referring to Representatives Marjorie Taylor Greene (R-GA), Paul Gosar (R-AZ), and Jim Jordan (R-OH), some of the most Trump-loyal members of the House who have been critical of McCarthy in the past and who were – like almost all Republicans when the vote actually came up – opposed to impeaching Trump.

.@GOPLeader is sitting in Jeff Miller’s apartment trying to figure out if he should get on a plane to Palm Beach. He’s calling Stefanik and begging her to hold the line. Greene, Gosar and Jordan are licking their chops. https://t.co/f5C1LvbLkl

McCarthy stepped on a rake with a denial – question now is how his conference and Trump react https://t.co/Nh9A6KdQl1

Lesbian Jeopardy! contestant Mattea Roach is on a winning streak & she’s raking in the cash