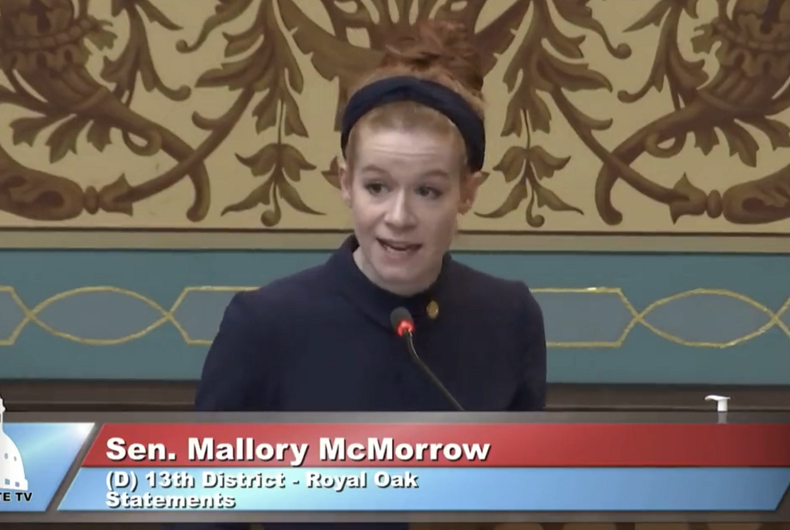 A Michigan lawmaker blasted a Republican colleague who called her called her a “groomer” who supports “pedophilia.”

“I am the biggest threat to your hollow, hateful scheme,” state Sen. Mallory McMorrow (D) said in a speech that has gone viral. “Because you can’t claim that you are targeting marginalized kids in the name of ‘parental rights’ if another parent is standing up to say ‘no.'”

McMorrow was responding to Michigan Sen. Lana Theis (R), who sent out a campaign email earlier in the week that said “our children are under assault in our schools,” citing “gender-bending indoctrination… inappropriate sexual content, stealing their innocence… Critical Race Theory – pitting children against one another.”

The email called McMorrow a troll and a snowflake who is “outraged they can’t teach can’t groom and sexualize kindergarteners or that 8-year olds are responsible for slavery.” [sic]

“You say, ‘She’s a groomer. She supports pedophilia. She wants children to believe that they were responsible for slavery and to feel bad about themselves because they’re white,'” McMorrow said.

“I am a straight, white, Christian, married, suburban mom who knows that the very notion that learning about slavery or redlining or systemic racism somehow means that children are being taught to feel bad or hate themselves because they are white is absolute nonsense,” McMorrow continued.

“I know that hate will only win if people like me stand by and let it happen,” she said, before addressing Theis: “So I want to be very clear right now: Call me whatever you want. I hope you brought in a few dollars, I hope it made you sleep good last night.”

Senator Lana Theis accused me by name of grooming and sexualizing children in an attempt to marginalize me for standing up against her marginalizing the LGBTQ community…in a fundraising email, for herself.

Hate wins when people like me stand by and let it happen. I won't. pic.twitter.com/jL5GU42bTv

Even former Secretary of State Hillary Clinton was impressed by McMorrow’s speech.

"I know that hate will only win if people like me stand by and let it happen."

Please watch this incredible speech from Michigan State Senator @MalloryMcMorrow, who is not standing by. pic.twitter.com/0w6AiH4QoH