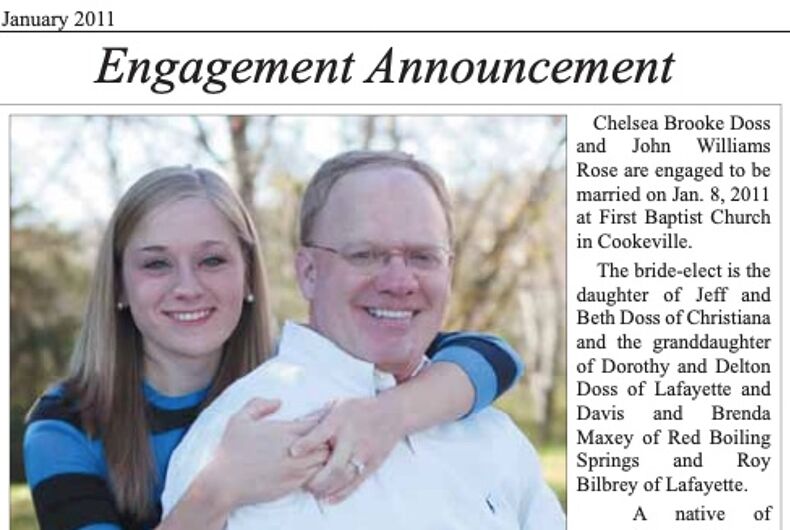 Republican U.S. Congressman John Rose from Tennessee opposed the Supreme Court nomination of Ketanji Brown Jackson due to her alleged “leniency” in child sex offense cases. Rose also represents a state that had sought to legalize child marriage with no age limits.

So it’s raising eyebrows that in 2011, when he was 46-years-old, he married Chelsea Doss, a 22-year-old whose university schooling he helped pay for. Their 2011 wedding announcement has gone viral, partly because congressional Republicans and other conservatives have accused LGBTQ teachers and allies of “grooming” young people for sexual abuse.

According to lawyer and pundit Adrienne Lawrence, Rose and Doss may have met when she was in high school. She was involved in the Future Farmers of America (FFA), a group that Rose served as a “lifelong volunteer” for, even attending state conventions that Doss may have attended.

When Doss was a 20-year-old junior at Tennessee Tech University, she became a national officer for the FFA. In that role, she received The Jerry and Betty Williams Rose Scholarship, a $5,000 a year agricultural scholarship founded by the congressman’s parents.

At the time, John Rose, a Tennessee Tech alum, was the 44-year-old chairman of the board governing the Tennessee FFA’s scholarships. He was also a chairman of the university board overseeing the school’s fundraising, according to journalist Christopher Ingraham.

In a November 2009 Tennessee Tech University press release, Doss said, “John has made everything possible that I’ve done in FFA beyond high school. Through the scholarship that he provides, I’ve not had to have a job through college. I’ve been able to train, improve, focus on FFA and focus on school. That scholarship has made all the difference. He has also coached me during my preparation, which has been extremely helpful.”

About 14 months later, in January 2011, Rose announced his engagement to Doss in the Eagleville Times, a small newspaper in his county. Doss was 22 and hadn’t yet graduated college — they married later that month. They now have two sons.

It’s unclear when the two started dating, when their relationship became romantic or whether their relationship violated any university or FFA policies. Neither Rose, the university nor the FFA responded to Ingraham’s questions on these issues. Tennessee law allows children to marry, with parental consent, at the age of 17.

“There’s no evidence their relationship broke any laws,” Ingraham wrote, “[but] Rose’s romantic pursuit of a much younger woman over whom he held real authority — not only as a scholarship provider, but also as a foundation board member at institutions Chelsea Doss was part of — raises questions about his ethical sensibilities and attitudes toward power.”

“These questions on the use and potential abuse of power have a direct bearing on Rose’s philosophy toward the authority he now wields in Congress,” the journalist added.

It also raises questions about whether Rose used his financial and organizational influence to befriend and establish an emotional connection with the young woman. When applied to minors, such actions are called “grooming.”

Legislators in Rose’s home state were criticized for trying to pass a homophobic bill that would’ve allowed children to be forced into heterosexual common-law marriages. After much public criticism, the bill’s lead sponsor updated it to only apply to people above the age of 18. Democratic critics of the bill state that it could still lead to people being forced into marriages against their will.

Rose, and other Republicans, took issue with Jackson’s installment on the Supreme Court, stating that her sentencing against child sex abusers had been too “lenient.” Rose’s fellow Trump-loving congressional counterpart Marjorie Taylor Greene (R-Ga.) said that anyone who voted for Jackson was “pro-pedophile.”

“I believe Judge Jackson’s repeated leniency in federal sentencing cases towards prisoners in Guantanamo Bay, child sex offenders, and convicted criminal drug traffickers gives us a window into her activist judicial philosophy and renders her unsuitable to serve on the highest court,” Rose said in a statement about Jackson’s nomination, urging the Senate to reject her.

Meanwhile, Greene’s fellow America First caucus members, Matt Gaetz (R-Fla.) and Lauren Boebert (R-Colo.), have both had involvements with possible child sex scandals. Gaetz is being investigated for possibly sex-trafficking a minor and Boebert’s husband pled guilty to exposing himself at a bowling alley where Boebert – 17 at the time – was present.

Correction: A previous version of this story said that Doss was 19 at the time of her wedding. She was 22.