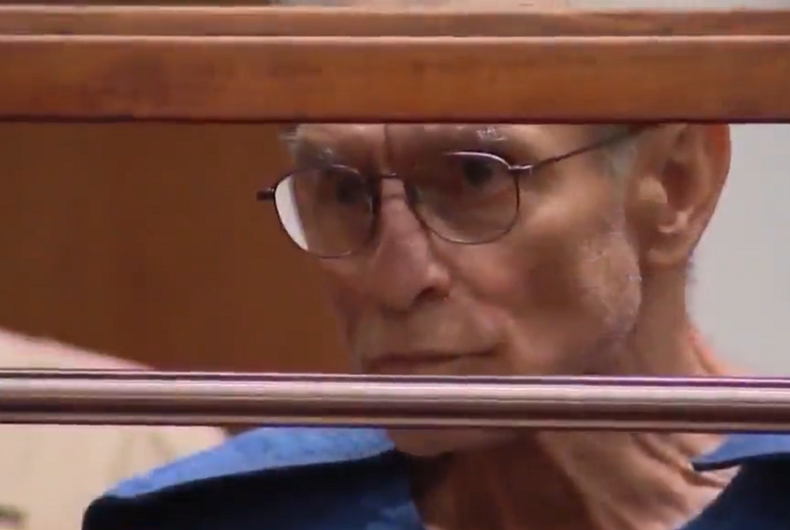 Gay millionaire Ed Buck has been sentenced to 30 years in federal prison.

Buck, 67, escaped justice for years despite his well-documented fetish for injecting methamphetamine into vulnerable men for sexual gratification.

Gemmel Moore and Timothy Dean both died at Buck’s house. He was charged with the deaths of both men, running a drug den, and enticing others to travel for prostitution, and he was found guilty on all charges this past July.

In the lead-up to his sentencing today, his lawyers asked for a sentence that would allow him to one day be free again, while prosecutors wanted him to be sent to prison for the rest of his life.

“If Buck were ever released,” prosecutors wrote, “he would feed his compulsion to inject others until the day he died.”

“One death is a tragedy, but two is a pattern,” assistant U.S. attorney Chelsea Norell told the court earlier today, the LA Times reports.

“I ask that the court take a look at my life in total,” he said, not “the horrible caricature the government painted me as — a meth-fueled axe killer.”

The court has yet to determine how much Buck must pay in restitution as his lawyers put together information about his finances. Investigators found bank statements showing that he had $3.5 million in several accounts, but his lawyers said that number is “grossly inflated.” Prosecutors want him to be ordered to pay around $52,000 to his surviving victims and a $400,000 fine.

Investigators determined that Buck had tied down and injected several individuals with methamphetamine and other drugs; hundreds of videos of Buck sexually abusing various men some of whom were unconscious, hurling racial slurs at them, and injecting them with drugs were found at his home.

Buck sought out men who were struggling with homelessness and addiction, paying them for sex and to inject them with meth. The man who once ran for West Hollywood City Council in 2007 and championed for Arizona Gov. Evan Mecham’s impeachment in the 1980s became known as “Dr. Kevorkian” in the last decade among the local LGBTQ and homeless communities.

In 2017, Moore – a young Black gay man – was found dead in Buck’s West Hollywood apartment. Investigators heard accusations that Buck was providing drugs to sex workers to watch them take them, but prosecutors declined to press charges because they didn’t believe there was enough evidence. Moore left behind a diary that documented Buck’s actions.

In 2019, Dean died in Buck’s apartment from a drug overdose, and, again, the same prosecutor declined to press charges.

Activist Jasmyne Cannick and others argued that the decision was politically motivated since Buck was a large contributor to Democratic politicians.

Later that year another man overdosed in Buck’s apartment and said that Buck tried to keep him from getting medical attention. He escaped and Buck was later arrested in that case.

The case that eventually brought justice for the victims was prosecuted by the federal government. The conviction happened four years to the day Moore was found dead in Buck’s apartment.

“I hope that Black gay men everywhere know that it doesn’t matter if they’re sex workers, escorts, gay, HIV+, poor, unhoused or even addicted to meth—their life matters,” Cannick tweeted after the conviction was announced. “Your life matters. We’re on each other’s teams.”

Morning! Up early, ready to get this over with. It's been long overdue. Almost 5 years. He shoulda been in cell block 4. I have no sympathy for #EdBuck and can be petty AF when it comes to him (and those associated w/him). I hope he gets life plus 120 years—consecutively. 💅🏾 pic.twitter.com/Pl6IJyH3tY