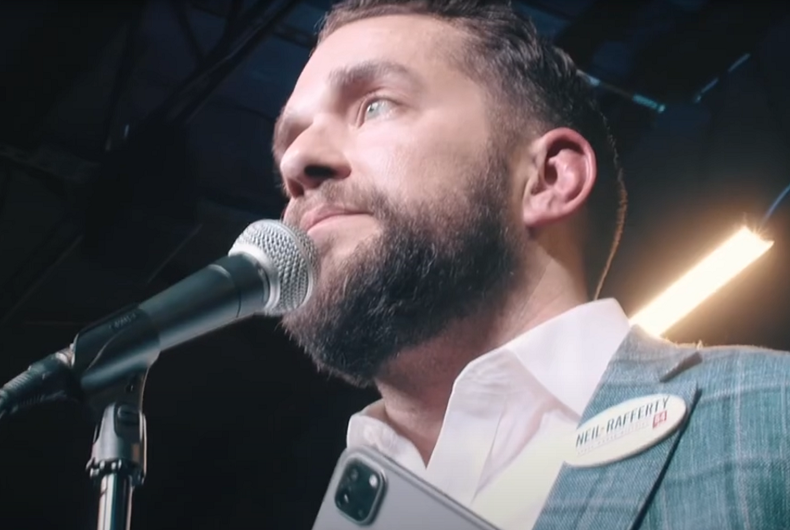 An impassioned Democratic lawmaker in Alabama calling out his Republican colleagues for their attacks on trans youth has gone viral after the state passed a law to jail doctors who provide gender-affirming care to minors.

Related: Jimmy Kimmel had the best response to Marjorie Taylor Greene calling the police over a joke

The Alabama Senate passed an anti-transgender bathroom bill, requiring transgender students to use the restroom associated with the sex on their birth certificate instead of their gender. At the last minute, the senators added a Don’t Say Gay bill that’s even more restrictive than the on Florida passed.

At the same time, the Republican-controlled Alabama House passed a law to criminalize doctors who provide gender affirming care to transgender youth, and that’s what Rep. Rafferty – one of 28 Democrats in the chamber with 75 Republicans – was speaking out against.

He called out Republicans pushing the bill for their insinuation that the families of transgender youth don’t care about their kids.

“It’s a priority for us to be getting involved in private family medical decisions that are made with a team of healthcare providers, that are made with the parents centering around the child who are surrounded by a team of healthcare providers, mental health professionals who are guiding them through this process?” he implored his colleagues. “You want to think you’re just going to a doc-in-a-box or willy-nilly, just getting prescribed this stuff because somebody just said, hey, this is it.”

“That’s not how being transgender works.”

Then he discussed his own identity.

“Trust me, if I didn’t have to be gay, I wouldn’t be,” Rafferty said. “You know how much easier my freaking life would be? This is personal y’all.”

“I’m trying to appeal to you that this is not small government. This is invasive.”

“Just don’t you dare call me a friend after this,” he said as he left the stand.

Lots of moments today in the Alabama Legislature. This is one of them. pic.twitter.com/XVmLuxayXy

Several civil rights organizations and firms – Lambda Legal, The American Civil Liberties Union, the ACLU of Alabama, Transgender Law Center, and Cooley LLP – have already promised to sue the state if it passes the ban on medical care.

“Shame on the cruel, heartless, and power-hungry state legislators that want to take away life-saving medical care from transgender youth in Alabama,” said Carl Charles, senior attorney for Lambda Legal. “We are ready to use the full force of the law to come down on this clearly unconstitutional legislation should it come to pass.”

Arkansas passed a similar medical ban last year. A federal judge has already issued a temporary injunction against that state’s legislation as a lawsuit arguing that the law is unconstitutional works its way through the courts.