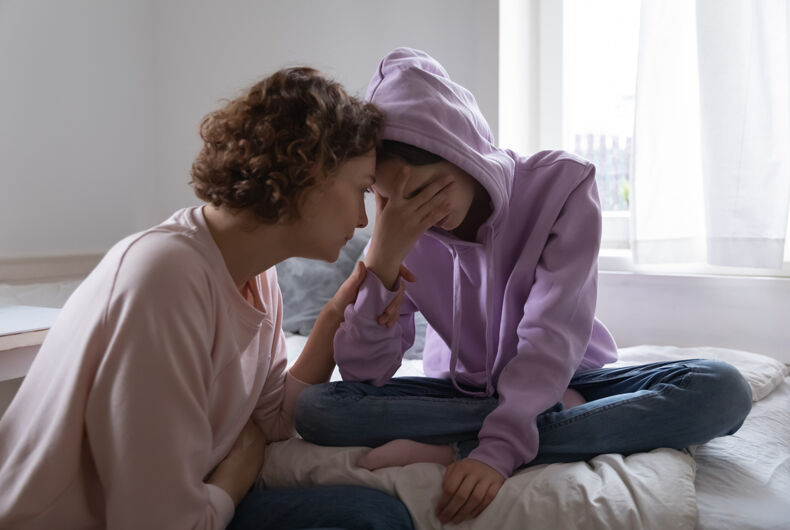 The Florida Department of Health is trying to convince parents in the state to stop their children from transitioning, and that includes even allowing trans kids to dress how they want.

The DOH released the non-binding guidelines yesterday with the explicit goal of countering affirming advice released by the U.S. Department of Health and Human Services (HHS) last month.

Citing a fake statistic that 80% of children change their minds about being transgender – the statistic was taken from a study that wasn’t focused on trans kids and was just about gender non-conforming kids – the Florida DOH tells parents to be afraid of the “potential for long-term, irreversible effects” of transitioning.

The guidelines specifically say that “social gender transition should not be a treatment option for children or adolescents.” Social transition refers to allowing kids to express their gender as they want and referring to them with a name and pronouns that they’re comfortable with.

The DOH does not discuss the “potential for long-term, irreversible effects” of forcing children to be someone they’re not.

The guidelines also say that puberty blockers, hormone therapy, and surgery shouldn’t be used on children, even though gender-affirming surgery is already not available for trans minors.

Research has shown that teens who wanted puberty blockers and got them were at a much lower risk of suicidal thoughts for the rest of their lives. The risks of going through a puberty that does not conform to one’s gender identity, which are known to be life-threatening, are not discussed in the DOH’s guidelines.

DOH added an exemption for intersex children, who are often forced to get surgery so that their appearances conform to their parents’ ideas about what their gender should look. The guidelines do not explain why the DOH recommends parents opt for cosmetic surgery on those minors’ genitalia.

In a separate press release, Florida Surgeon General Joseph Lapado accused HHS of lacking the “academic rigor” that the state of Florida’s DOH has.

HHS’s guidance “was about injecting political ideology into the health of our children,” Lapado said, before he went on to repeat the bizarre conspiracy theory that there are parents and schools forcing kids to transition: “Children experiencing gender dysphoria should be supported by family and seek counseling, not pushed into an irreversible decision before they reach 18.”

“The fact is that evidence-based, age-appropriate, medically necessary health care for trans youth — as outlined in the U.S. Department of Health and Human Services Fact Sheet — is supported by dozens of medical associations, including the American Medical Association, American Psychological Association, the American Academy of Pediatrics, and many others,” said Jay Brown of HRC. “It’s supported by the best available evidence. We will do everything in our power to stand with transgender young people in Florida and their families in this moment — because facts and truth still matter.”