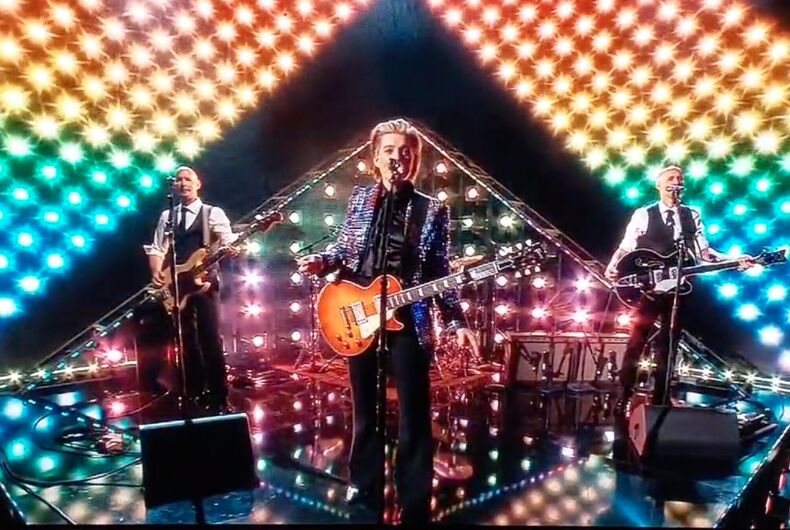 The 2022 Grammys were chock-full of incredible LGBTQ moments.

From red carpet PDA to rainbow-streaked performances, the LGBTQ community showed up in full force last night. Here are some of our favorite moments.

Lil Nas X, who was nominated for five awards last night, performed three songs from his album, Montero, while donning a variety of sparkly outfits.

Always one to call out his critics, Nas’s performance included a powerful moment in which quotes from social media trolls and news outlets were displayed on giant screens criticizing him for his bold, unapologetic way of being.

As Nas’s performance implied, all of the hate he has received only seems to make him stronger.

As part of the Brothers Osborne, out country star T.J. Osborne won for Best Country Duo/Group Performance for the song “Younger Me.”

In his acceptance speech, Osborne spoke through tears about how the song was written in response to his coming out.

He added that he not only gets to be accepting the award with his brother, but also, “I’m here with the man that I love and who loves me back. I don’t know what I did to be so lucky.”

After joyously kissing her wife on the red carpet, Brandi Carlile performed “Right on Time” in front of a massive display of rainbow lights.

And, another… Brandi Carlile just MADE my Grammys. And, to be honored with an intro by @jonimitchell and @TheBonnieRaitt Just wow! pic.twitter.com/JNtu6NtmRm

Lady Gaga and Tony Bennett have worked together a lot as of late. This year, she dedicated her performances of “Love for Sale” and “Do I Love You” – from their 2021 jazz album Love For Sale – to him.

The singer’s emotional performance was also accompanied by videos of the duo.

95-year-old Bennett, who has 20 Grammys to his name, has been struggling with Alzheimer’s and did not attend the show, but he and Gaga did win the award for Best Traditional Pop Vocal Album.

A collective tribute to Stephen Sondheim

Together, Ben Platt, Leslie Odom Jr., Cynthia Erivo, and Rachel Zegler sang some of Sondheim’s most popular songs in a powerful performance that also honored others in the music business who recently passed.

Ben Platt, Rachel Zegler, Cynthia Erivo, and Leslie Odom, Jr. perform #Somewhere from West Side Story and show what real talent sounds like at the #TheGrammys in memory of Stephen Sondheim and other artists we have lost.#GRAMMYs #GrammyAwards pic.twitter.com/3Q4d5OwDwG

Lauren Boebert wants to ban people from coming out before 21