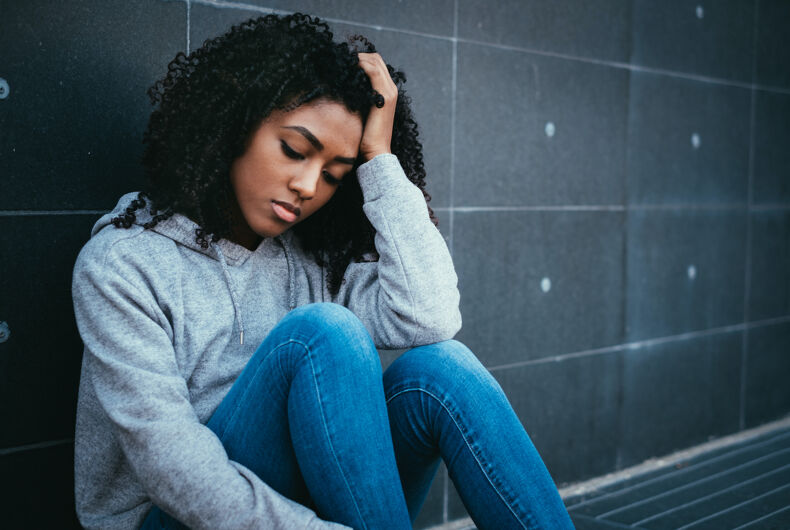 An anti-LGBTQ bill that has politicians on both sides of the aisle confused and alarmed passed the Oklahoma’s House State Powers Committee on April 13, and it is now heading to the Oklahoma House floor.

The Oklahoma Senate first passed Oklahoma S.B. 615 with a vote of 39-7 on March 9, with every Republican voting in favor.

Related: Oklahoma is advancing a bill that would criminalize school librarians over LGBTQ books

Authored by state Sen. David Bullard (R), S.B. 615 states that if a school counselor were to give any material of any kind related to sexual orientation and gender identity to a student (even in a confidential meeting), the counselor would be forced to disclose said material to the parent.

According to KFOR, state law says that teachers and administrators have to disclose and make available to parents materials dealing with sexual education, specifically, those dealing with sexual orientation and gender identity.  S.B. 615 wants to include school counselors on that list, confusing politicians on both sides of the aisle.

If passed, any and all instructional material – including pamphlets, textbooks, and other documents – or discussions meant to “elicit responses on sexual behavior or attitudes” would have to mandatorily be disclosed to any parent of a student participating in the activity.

Politicians on both parties worry this would not only discourage students from engaging a counselor due to fear of being outed to parents, but also that it would make the counselors have to be the ones to alert the parents, thereby erasing student confidentiality.

In defense of his proposed legislation, Bullard did state that the bill does not have a requirement of disclosure period.

S.B. 615 passed out of the committee by a 4-1 vote. The committee’s only Democrat, former educator Rep. John Waldron, voted against it.

The language of this bill is leaving many politicians alarmed. On Wednesday, they looked to Bullard to answer their many questions on the state senate floor.

State Sen. Brenda Stanley (R) voiced her concerns over the bill. “My concern is that we do not break that confidentiality agreement that we have with children,” Stanley said.

Bullard replied, “If the student comes in, voluntarily talks to the counselor about whatever they are struggling with, then that is a discussion between the counselor and the student. It’s when they bring them in to illicit a response and they hand them a material of some kind, [that] they have to have it open for [parents].”

Democratic state Sen. Kay Floyd asked, “Because it’s in that listing, any meeting would be subject to disclose to the parents and the superintendent, would it not?”

Floyd was quick to point out the inconsistencies in Bullard’s reply to the language of the bill.

“I hope that is the author’s intent, but that’s not what this language says,” said Floyd.

“So, you do not see that it may stifle a 15- or 16-year-old that may have some questions, and they may have some issues they want to talk to somebody about. Now, they won’t because they don’t want their parents to know where they are at. Are you concerned about that?” asked Murdock.

Bullard replied, “No, I’m not. That’s why we didn’t put a requirement to disclose in there.”

Bullard’s replies  confused some of his colleagues.

“I think I’m more confused now than I was when I started my questioning,” said state Sen. Carri Hicks (D).

Bullard’s bill is currently without title. Therefore, S.B. 615 will have to be reworked despite its passage through the Oklahoma Senate, according to KOCO.

Bullard states his bill is not an attack on LGBTQ people in any way, but rather about parental rights. It’s the same argument that has been used in other anti-LGBTQ bills (most notably Florida’s Don’t Say Gay law) and in political campaigns (such as Glenn Youngkin’s gubernatorial campaign).

The facts could not be more contrary to their reasoning.

No Promo Homo laws are proven to be detrimental to LGBTQ students. LGBTQ students in states with stigmatizing laws have less support in school from educators and other students and also have fewer LGBTQ-related resources (such as gender-sexuality alliances or GSAs). Teachers in these states are less likely to teach about LGBTQ topics in a positive way.

LGBTQ youth in these states are less able to access relevant school health services too.

A report published this year titled “A Call to Action: LGBTQ+ Youth Need Sex Education” found that when LGBTQ youth are further stigmatized by laws and policies that shame their identities, they face even more challenges. In fact, in states with laws prohibiting positive discussions of LGBTQ sexuality in school health and sex education classes, students were:

Studies have shown that banning LGBTQ-inclusive education doesn’t provide anything of positive substantiality. It won’t stop people from being queer. The social contagion myth is just that — a myth. The only thing banning LGBTQ inclusion will do is bring further harm to students of all sexual orientations and gender identities.

That includes cutting off valuable resources to help LGBTQ people live a thriving life, as well as hurting straight, cis children by not providing resources that would open them to seeing their LGBTQ peers as friends to develop allyship with.

“When we further create a situation that makes counselors, often times the only safe places for students to have those discussions, especially if they live in a household that isn’t affirming. We are just harming the mental health and wellbeing of the most vulnerable kids in our school systems,” said Nicole McAfee, executive director of Freedom Oklahoma.

It is illegal to be LGBTQ in these countries