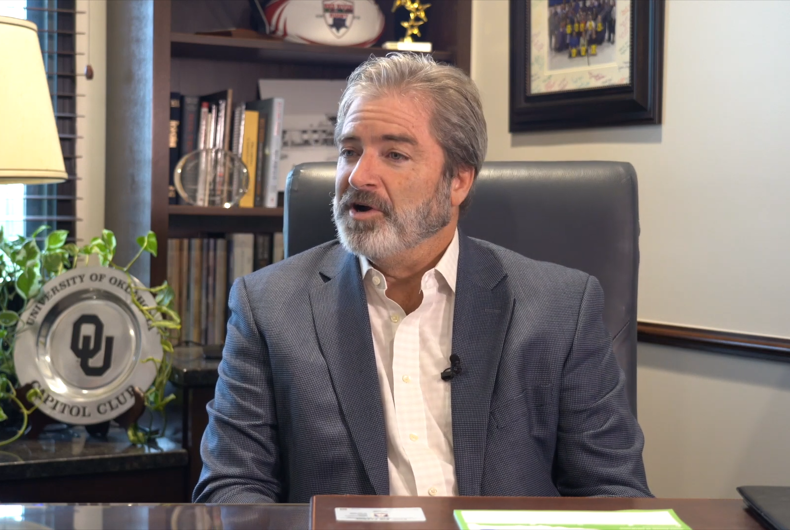 After the very end of a legislative session on Tuesday, the Oklahoma Senate Education Committee passed a bill to ban LGBTQ books (and books on LGBTQ-inclusive sex education). The bill now looks to advance towards the Senate floor.

Authored by state Senator Rob Standridge (R-OK- District 15), Oklahoma SB 1142 would criminalize any school official or librarian that has any books that “make as their primary subject the study of sex, sexual preferences, sexual activity, sexual perversion, sex-based classifications, sexual identity, or gender identity or books that are of a sexual nature.”

This bill by Standridge is in conjunction with his other bill, SB 1470, that seeks to penalize teachers for a minimum of $10,000 if they teach something that goes against a student’s religious belief. This bill also works in conjunction with SB 1654, authored by state Senator Shane Jett (R-OK- District 17),which seeks to ban LGBTQ books, as well as books about “recreational sexualization”, i.e. books that discuss “non-procreative sex”.

Standridge’s SB1470 is different from the other two bills in the fact this bill would bar teachers from teaching in the state of Oklahoma for five years, beyond the two years in SB 1142.

SB 1470 has not been brought up for a vote, but SB 1142 passed on March 1 on an 8-4 vote along party lines through Republican majority. Only one Republican voted against the bill.

These bills are part of a coordinated effort by Republicans known as the “No Promo Homo” laws. Though such laws have been most notably in the news due to Florida’s “Don’t Say Gay” bill, The Hill reported that 15 other similar bills are currently floating through U.S. state legislatures. Oklahoma is just one of many Republican-led states that are currently targeting LGBTQ books and people as part of a plan that would lead to monumental harm for LGBTQ kids.

No Promo Homo laws are proven to be detrimental to LGBTQ students. LGBTQ students in states with stigmatizing laws have less support in school from educators and other students as well as fewer LGBTQ-related resources, such as gender-sexuality alliances or (GSAs). Teachers in these states are less likely to teach about LGBTQ topics in a positive way.

A report published this year titled A Call to Action: LGBTQ+ Youth Need Sex Education found fewer than 8.2 percent of LGBTQ students receive comprehensive LGBTQ education. When LGBTQ youth are further stigmatized by laws and policies that shame their identities, they face even more challenges.

In fact, in the states with laws that prohibit the positive discussion of LGBTQ sexuality in school health and sex education classes, students were:

A Human Rights Campaign analysis of the 2019 Youth Risk Behavior Surveillance found that 29 percent of lesbian and gay youth, 31 percent of bisexual youth and 43 percent of transgender youth have been bullied on school property, compared to 16 percent of non-LGBTQ youth. LGBTQ students who reported high levels of anti-LGBTQ victimization at school have lower GPAs, lower self-esteem, higher levels of depression, and are approximately three times more likely to have missed school in the past month due to feeling unsafe, compared to their less frequently victimized peers.

According to GLSEN’s 2019 School Climate Survey, 59 percent of LGBTQ students reported feeling unsafe overall in their school because of their orientation and 37 percent because of their gender.

About 42 percent felt uncomfortable because of their gender expression. Around 45 percent 44 percent of respondents, respectively, avoided gender-segregated bathrooms and locker rooms at school, and 28 percent reported that their schools had policies preventing them from using the correct bathroom. In total, 59 percent of students reported that they’ve experienced anti-LGBTQ discriminatory policies at their schools.

In some of the most disturbing news, almost 69 percent of students said they have been verbally harassed at school and a quarter have been physically harassed. About 11 percent have been assaulted at school because of their gender or orientation.

Nearly a third of LGBTQ students said they have even skipped an entire day of school in the previous month because they feared for their safety, and nearly a fifth of LGBTQ students (17.1 percent) reported having ever changed schools due to feeling unsafe or uncomfortable at school.

It is the responsibility and role of schools to provide a safe and supportive learning environment for all of their students.

Implementing comprehensive and LGBTQ-inclusive policies can promote the health and well-being of LGBTQ students, GLSEN states.