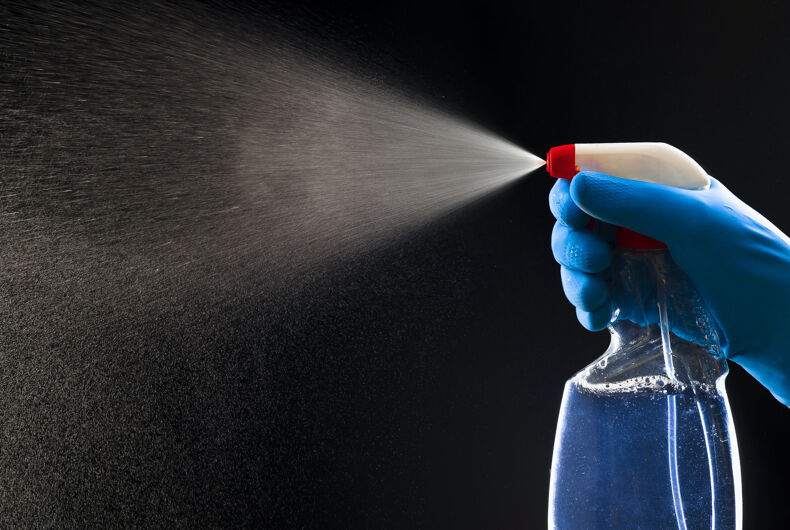 Four students in Georgia, ages 14 to 17, have been charged for allegedly forcing a student into a closed space, abusing him with homophobic slurs and then spraying him with toxic cleaning chemicals.

Two incidents involving the teen allegedly occurred on March 23 and March 31. The four accused Loganville High School (LHS) students allegedly forced a 15-year-old ninth-grade student into a closed space after school hours during an extracurricular activity. Different reports have alternately described the space as a “bathroom closet” or a “school theatre dressing room.”

In the space, the alleged assailants held the student against his will for a “prolonged period of time”, made anti-gay slurs and then used cleaning chemicals on him. It’s unclear if the alleged victim identifies as LGBTQ. Cleaning products often contain substances that can seriously irritate or burn the skin, eyes, nose and throat. They can also be highly poisonous or cause breathing problems if swallowed.

The Loganville Police Department (LPD) investigated and charged four students. The oldest suspect, 17-year-old Kelsey Juliana Hayes, has been charged with one felony count of false imprisonment. She was arrested and will be tried as an adult.

The 16-year-old and two 14-year-old suspects have been charged with felony false imprisonment and misdemeanor counts of simple battery and reckless conduct. Their names haven’t been released since they are underage.

“We do not tolerate bullying behavior in any shape, form or fashion, for any reason, and I believe the charges made in this case reflect that stance,” the LPD said in a statement.

Walton County School superintendent Nathan Franklin told WAGA-TV, “Student safety is a top priority and school officials are investigating the incident and working with law enforcement officials to ensure the district’s code of conduct and legal charges are appropriately enforced.”

Jordan Fannin, a gay former LHS student, is organizing an anti-bullying rally to be held outside of the school on Tuesday.

“I was also a victim of hazing and of bullying,” Fannin told the aforementioned news station. “It brings back post-traumatic stress because I’ve been in similar situations. As a young child I was in such fear because all these people I am trying to speak against are so powerful. I just felt I wouldn’t be heard and I feel like I have little more of a voice as an adult not associated with the school system.”

“I would love to reach a broader audience that can bring awareness and possibly create a change in the school district not only in Georgia but other communities,” Fannin added.

Why are Kentucky Republicans so afraid of a mediocre 12-year-old athlete?