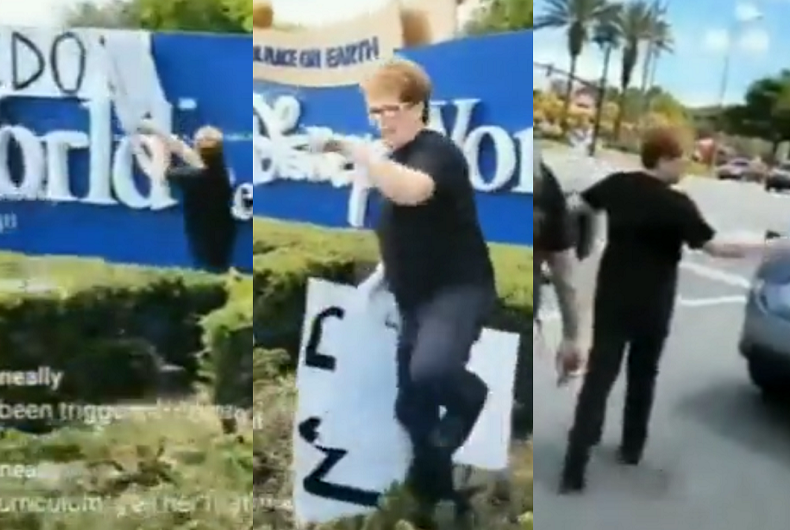 The woman tore down the offensive sign at DisneyPhoto: Screenshot

A video of a woman taking down the “PEDO World” sign that far-right activists put up at Disney World is going viral.

The video was shot outside Disney World Resort in Florida, where far-right activists and QAnon believers have been protesting Disney for weeks due to Disney’s statement opposing the state’s Don’t Say Gay law.

Florida’s Don’t Say Gay law bans discussions of sexual orientation and gender identity in elementary school and requires them to be “developmentally appropriate” in older grades. The law doesn’t define what any of that means exactly but instead allows parents to sue schools if they feel that the law has been violated, making it what one lawyer called a “lawsuit factory.”

Opponents of the bill say that it will be used to end all discussion of LGBTQ people in schools, silencing LGBTQ students and those with LGBTQ family members. Supporters of the bill have been calling anyone who opposes the bill a pedophile or a groomer.

In the video, the woman walked up to the “PEDO World” sign – which the protestors had attached to the “Disney World Resort” sign – and started tearing it down.

“Oh shit!” one of the protestors shouted, calling the woman tearing down the sign “one of those triggered losers.”

“Is that a man or a woman?” another protestor yelled.

“You support pedophilia!” another screamed. “Wow,” they continued sarcastically.

“Do you got a d**k?” someone else shouted, implying that the woman tearing down the sign is transgender, as if that were an insult. “She’s got a d**k!”

“It’s bigger than yours, b***h!” she yelled back at the QAnon protestors, as she tore up their sign and got back in her car.

Major props to this lady for taking down the "Pedo World" sign that right-wing protesters put up for display at Disneypic.twitter.com/1dJVqk11jg

The video has been viewed over 300,000 times so far on Twitter alone.