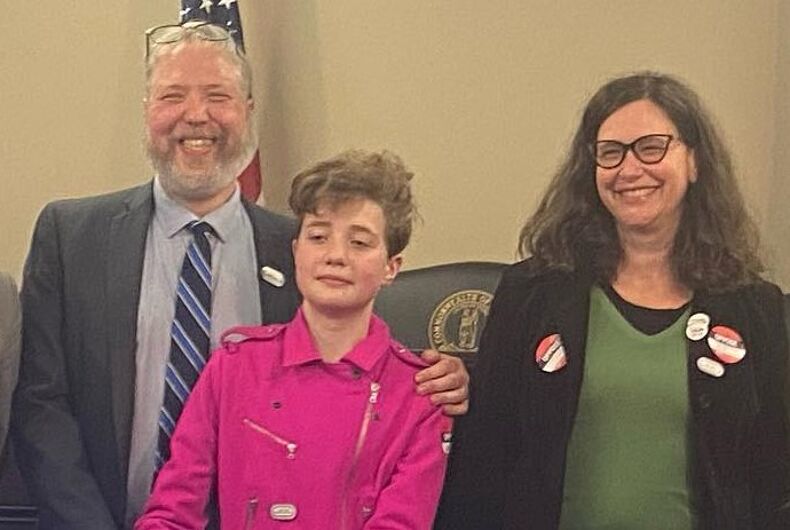 Fisher Wells, the 12-year-old field hockey player targeted by Kentucky’s ban on trans athletes, isn’t exactly a competitive threat. According to her own parents, she’s not a particularly gifted athlete. The Courier-Journal reports that her school’s fledgling team, which loses more games than it wins, needed her participation in order to have enough players.

Chris Hartman, executive director of the Fairness Campaign, says Wells is, as far as they know, the only trans student-athlete in the state.

“Kentucky’s a national embarrassment today, and it’s shameful that lawmakers would prioritize attacking one trans seventh grader, rather than the real issues facing Kentuckians,” he said. “It’s a sad day in our Commonwealth.”

Wells, who testified against the bill in February, agreed.

“It’s disgusting that this bill is even suggested,” she told legislators. Because of the passage of SB 83, Wells will be barred from playing on the team she helped to create.

Proponents of the bill insist it is necessary to ensure that cisgender girls don’t lose opportunities to competitors who are transgender. But there is no evidence of risk to cisgender athletes, and the state’s only known trans female athlete is actually responsible for increasing athletic opportunities for girls in Kentucky.

“Transgender children deserve public officials’ efforts to demonstrate that they are valued members of our communities through compassion, kindness, and empathy, even if not understanding,” Beshear wrote in a statement.

Despite the rhetoric of trans athletes dominating women’s sports, state efforts to ban transgender youth from participating in athletics are often legislating against an exceptionally small number of students. Kentucky’s actions echo those in Utah, where legislators likewise overturned a veto by the state’s governor to push through a ban on trans athletes that applies to very few students. According to Gov. Spencer Cox (R), only four transgender youth are currently competing in athletics in the state.

“Four kids and only one of them playing girls sports,” Cox said. “That’s what this is all about. Four kids who aren’t dominating or winning trophies or taking scholarships. Four kids who are just trying to find some friends and feel like they are a part of something. Four kids trying to get through each day. Rarely has so much fear and anger been directed at so few. I don’t understand what they are going through or why they feel the way they do. But I want them to live.”

Lawmakers have also banned trans youth from participating in sports in Arizona and Iowa, and are poised to override a governor’s veto in Indiana.