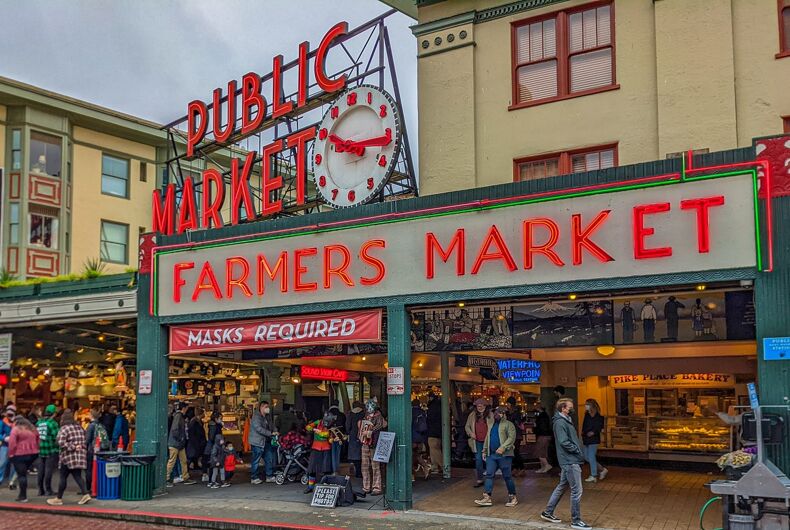 I saw you on my recent trip back to Seattle. I was arriving at the new Capitol Hill metro station, and you were just emerging up from the escalator, stepping out into the daylight, enjoying the sunlight on your face. You were young, in your mid-20s, tanned and a bit scruffy, slender, but carrying your heavy backpack with ease.

You looked around, and I thought about asking if you needed directions. But no, I saw from your face that you weren’t lost — just excited to have arrived in Seattle, probably for your very first time.

First things first: don’t get used to that sunlight on your face. Sunny winter days like this one are pretty rare in Seattle!

But as for the city itself, I really hope you enjoy it as much as I did. And who knows? Maybe the city will change you as much as it did me.

I can’t say for sure, because your Seattle is definitely not my Seattle.

I first arrived in Seattle in 1989. All those shiny skyscrapers to the west of us? They’re mostly new, along with the hip cafes and coffees shops filling Pike and Pine streets, and even the light rail station you just stepped out of.

But don’t worry: I’m not here to harangue you about how much better my Seattle is than your Seattle. That fact is, Seattle had changed a lot by the time I arrived too — and so many people told me how much better it had been “before.” I hated that kind of talk then, and I still hate it now.

When I arrived in Seattle, I was about your age, and I had $1500 to my name — which is about what you look like you have. I’d packed everything I owned in my car, just like it looks like you have everything you own in that backpack. A friend had offered me his basement to live in for a month.

The basement was dark and musty, but I didn’t care. Back then, I would’ve put up with almost anything to make my way in the world.

I wanted a lot of things from Seattle: to become a writer, to live in a city that had long beckoned me, and — yeah, I’ll admit it — to fall desperately and hopelessly in love.

More than anything, I wanted an unconventional life as far as possible from the boring suburbs of Denver where I’d grown up. A life my parents told me over and over was neither possible nor smart.

I didn’t care. I knew what I wanted.

The Pacific Northwest’s grey skies and dank weather couldn’t have been more different from Colorado’s three hundred days of sunshine. But I ended up loving it. All that gloom made me feel like I lived at the end of the world, in the best possible way.

Back in Colorado, I grew up eating things like meatloaf and Ragu sauce on spaghetti — definitely not “pasta.” But I quickly discovered Seattle’s fantastic Asian food — everywhere, not just in the International District. Pad see ew and tofu with black bean sauce quickly become my meat and potatoes.

I found a room to rent in a rundown house along with four roommates. It wasn’t much better than the basement where I lived that first month, but it also had a million-dollar view of Puget Sound and the Olympic Mountains.

Although these days, it would be more like a five-million-dollar view.

That view made the city feel massive like I really did live at the end of the world — and it made me feel alive with endless possibilities.

I took a job as a flight attendant, mostly because I knew the layovers and days off would give me lots of time to write. I signed up for writing courses at the University of Washington and was soon churning out story after story.

And I endlessly explored my adopted hometown, loving every quirky nook and cranny, from the Fremont Troll to the coffee carts springing up on every street corner.

This was before Starbucks took over the world, but even that would end up being kind of fun — along with the exponential growth of Microsoft, Amazon, Zillow, and Expedia. Before too long, Seattle didn’t feel like the end of the world but, rather, the center of the world.

In turn, that led me to joining a writing group where I met the man with whom I just celebrated our thirtieth anniversary.

Desperately and hopelessly in love, indeed.

Culturally speaking, Seattle was also coming into its own during those early years. Grunge and Nirvana took over the world. Sleepless in Seattle and Frasier were huge hits, and Seattle landed on the cover of Newsweek with the headline: Everybody else is moving to Seattle. Should you?

During my thirty years here, the population of Seattle grew by more than fifty percent — and, fortunately, became much more racially diverse.

My husband Brent and I built a great life together. I published several novels, and co-founded a website that was kind of a big deal for a while — and even sold to MTV/Viacom.

But the pace of change in Seattle was insane, and the city couldn’t avoid some serious growing pains. Seattle’s increased population led to horrendous traffic problems, skyrocketing housing prices, and growing numbers of unsheltered people living on the streets.

I changed too. After a few decades, the grey skies that had seemed so conducive to writing became oppressive. I started to dread winter.

And while I loved exploring the city, eventually I’d seen it all (and then some). How many times could I ride the Burke-Gilman trail or wander through Pike Place Market? Even hiking the nearby mountains began to feel stale and uninteresting.

In 2016, when Brent suggested we sell our house in Seattle and move abroad, it felt absolutely right. I knew it was time to say goodbye to my Seattle. To use the courage it had given me all those years ago to build another unconventional life.

So that’s what I did.

But don’t worry, Seattle Newcomer. What felt stale to me can still be incredibly exciting for you. That’s the magic of cities: for different people, they’re completely different things.

I hope you find in Seattle all the things I found — your town coffee shop, a circle of friends, a career, a love.

A life. Maybe even an unconventional one, if that’s what you want.

Whatever kind of life you want, I truly hope that’s it’s one you love as much as I’ve loved mine.

Michael Jensen is a novelist and editor, and one half of Brent and Michael Are Going Places, a couple of traveling gay digital nomads. Subscribe to their free travel newsletter here.