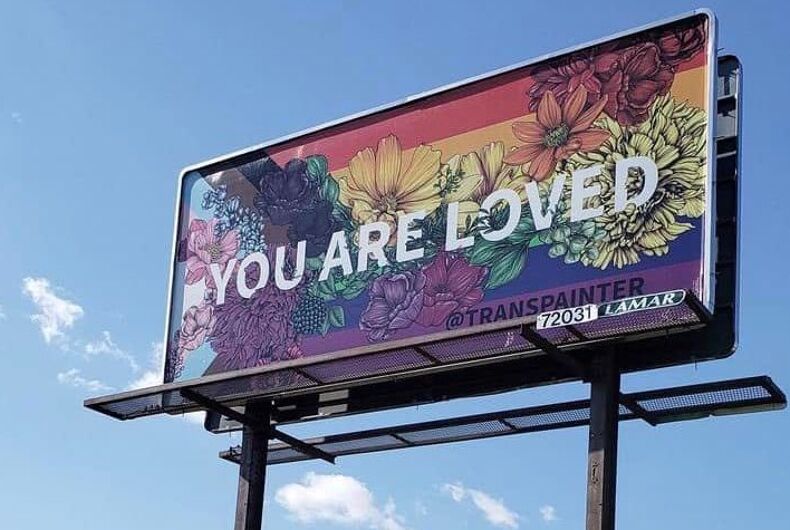 To counteract the hatred of and distress caused by the over 120 anti-LGBTQ bills introduced in 30 states across the nation this year, a group has started putting up billboards expressing support for queer people.

The group — Have a Gay Day, based in Dayton, Ohio — has erected billboards so far in 15 states, including Arizona, Utah, Oklahoma, Texas, Mississippi, the Carolinas and Indiana.

Related: A Republican used a sketchy Ohio PAC and Russian spies to try and unseat a pro-LGBTQ legislator

The billboards — designed by transgender mural painter Rae Senarighi — bear messages like, “You are loved” against a rainbow flower background, and “Be careful who you hate, it could be someone you love,” alongside a heart in the pink, white and blue colors of the transgender flag.

Knote’s group raised over $4,000 for the campaign and has partnered with other national LGBTQ organizations to help broadcast similar messages of support. Some billboard companies have rejected his group’s LGBTQ-friendly messages. But nevertheless, his group remains determined to put up more in the months ahead.

The group’s messages are undoubtedly needed now, especially as bills target queer youth by banning LGBTQ discussions in the classroom and prohibiting trans kids from playing in sports or getting life-saving medical care. Ohio itself is considering two such anti-trans bills.

Studies have shown that anti-LGBTQ legislation worsens the mental health of queer people as they have their right to exist debated in the public sphere. Calls to LGBTQ help and suicide hotlines typically increase in states considering anti-queer legislation.

Meet the refugees fleeing the Russian invasion of Ukraine

Welcome to Seattle, newcomer. I hope you enjoy it as much as I did.