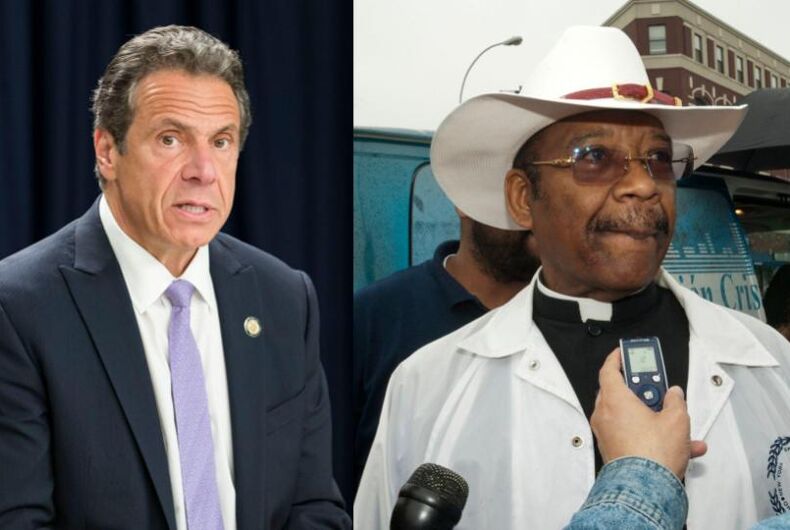 Cuomo has been on what some call a “comeback tour” since leaving office, speaking on New York policy issues and even releasing his own state budget priorities. According to Politico, he told reporters after the event that he hasn’t ruled out another run for governor.

Related link: Not that long ago everyone was a little Cuomosexual. It was just a phase.

“I have a lot of options open, and I’m considering them,” he said. Among those options: creating his own political party in order to get on the ballot. “I’ve done it before. My father’s done it before.”

Cuomo appears to be trying to rehab his image, with a new ad spot about his record as governor.

“While some have attempted to rewrite history, NY'ers know that Gov Cuomo fought for & delivered real results for them…& he always will”
–@RichAzzopardi

Watch “The Record” on #Vimeo https://t.co/ieSP0rza5h

While he avoided specifically mentioning the accusations of sexual assault that led him to resign, Cuomo portrayed himself as a victim of bullying.

Cuomo, whose daughter Michaela is queer and bisexual, has been a longtime advocate of LGBTQ rights, which makes his friendship with Diaz unexpected.

Diaz was the only Democrat in the state senate to vote against marriage equality, describing same-sex marriage as a sign of the coming apocalypse. At the time, he called out Cuomo for his support.

“I am deeply offended that during this Holy Week, which is a most sacred time to millions of New Yorkers, Governor Andrew Cuomo is working hard to mobilize elected officials to legalize homosexual marriage in New York,” Diaz said in a 2011 statement. “Now Governor Cuomo is targeting communities of faith in an effort to redefine marriage. […] I encourage all New Yorkers of faith to raise your voices in prayer and in action to prevent Governor Cuomo from redefining marriage.”

Diaz, a former member of the New York City 18th Council District (Bronx) after losing a primary bid for a congressional seat to gay democrat Ritchie Torres. Torres went on to win the election.

Diaz has a long history of opposing LGBTQ equality. In the 1990s, he objected to New York City hosting the 1994 Gay Games because he believed the event would spread AIDS and corrupt children. As recently as 2019, he accused the New York City Council of being “controlled by the homosexual community.”

Welcome to Seattle, newcomer. I hope you enjoy it as much as I did.

Americans’ support for LGBTQ rights is higher than ever