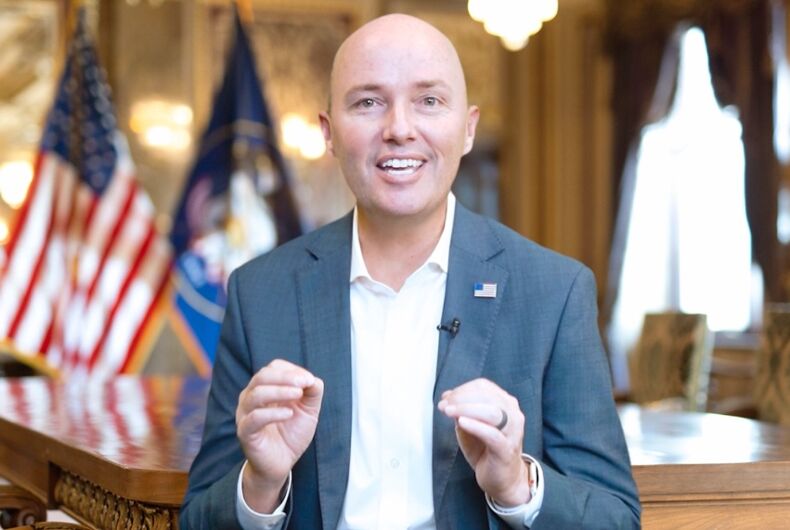 On Friday, the Utah legislature voted in a special session to override Republican Gov. Spencer Cox’s veto of a bill to ban transgender girls from participating in school sports.

The bill, H.B. 11, passed 56-18 in the House and 21-8 in the Senate, with 10 House Republicans and 5 Senate Republicans changing their previous votes against the bill to support it.

The bill will now go into effect on July 1, according to NBC News.

In a letter sent to the leaders of the Utah state senate and house last week to explain his veto, Cox wrote that the bill “has several fundamental flaws and should be reconsidered.”

“I must admit, I am not an expert on transgenderism,” Cox wrote. “I struggle to understand so much of it and the science is conflicting. When in doubt however, I always try to err on the side of kindness, mercy, and compassion. I also try to get proximate and I am learning so much from our transgender community. They are great kids who face enormous struggles.”

Cox also cited statistics showing that of the 75,000 high school students participating in school sports in the state, there are only four out trans kids doing so – only 1 of whom is on a girls team. He added that 86% of trans youth report suicidality and 56% have attempted suicide.

“Four kids and only one of them playing girls sports,” Cox said. “That’s what this is all about. Four kids who aren’t dominating or winning trophies or taking scholarships. Four kids who are just trying to find some friends and feel like they are a part of something. Four kids trying to get through each day. Rarely has so much fear and anger been directed at so few. I don’t understand what they are going through or why they feel the way they do. But I want them to live.”

He also said that the bill “will likely bankrupt the Utah High School Athletic Association [UHSAA] and result in millions of dollars in legal fees for local school districts.”

He said that he wanted a commission to decide on transgender girls’ participation in schools sports on a case-by-case basis and that he hoped this could be a compromise.

I know most won’t read past a headline but please read my veto letter—especially if you disagree with me. The veto will be overridden on Friday and then we will have a special session to fix a few things. Trans sports is a terribly difficult issue. Please be kind to everyone. 1/ pic.twitter.com/5991MF2xqa

But clearly, the legislature didn’t listen.

In the wake of the override, Joanna Hoffman, Director of Communications at Athlete Ally, a nonprofit advocacy organization for LGBTQ athletes, sent a strong message to Utah’s trans youth.

“Utah transgender youth, you are loved, and we will never stop fighting for your right to participate in the sport you love.”