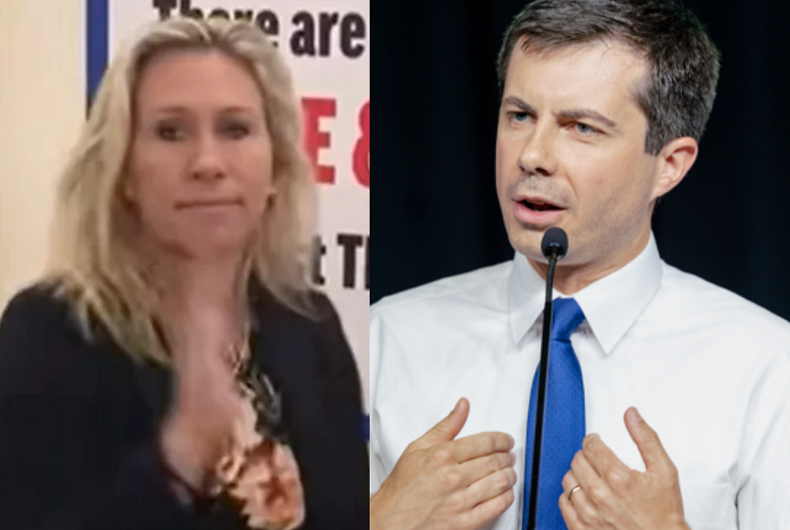 Out Secretary of Transportation Pete Buttigieg clapped back at Rep. Marjorie Taylor Greene’s (R-GA) bizarre insult where she accused him and his husband Chasten Buttigieg of creeping around girls’ bathrooms by saying she’s not even a mediocre Congresswoman.

“You know what?” Greene told the crowd in Commerce, Georgia at a Donald Trump rally over the weekend, “Pete Buttigieg can take his electric vehicles and his bicycles, and he and his husband can stay out of our girls’ bathroom.”

The crowd of Trump supporters cheered.

Buttigieg was asked on the Skullduggery podcast yesterday about Greene’s attempt at an insult, and he read her for filth.

“The reason you hear somebody like that making nonsensical – literally nonsensical comments like that, I don’t know what you’d do with an electric vehicle in any bathroom,” Buttigieg said, “is because they don’t want to talk about what we’re actually working on.”

“So they’re going to keep tripling down on anything that can divide and demonize and demoralize, and through that capture attention.”

Then he dug in.

“If I were to make a list of the 10… or 20… or 50… or 200 members of Congress whose commentary or thoughts or words it would be the most constructive to be debating or weighing right now, it wouldn’t be the two or three members of Congress who get the most attention on Twitter for whatever outrage they try to outdo each other on,” he said.