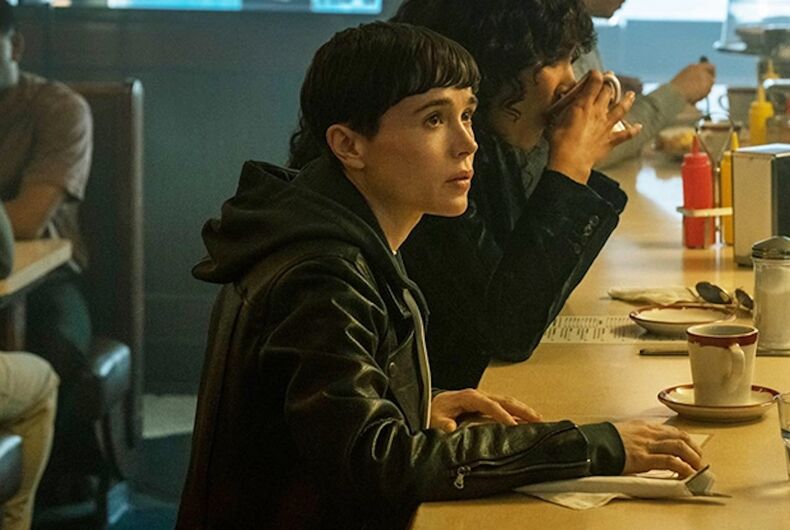 Transgender actor Elliot Page has revealed that his trans identity will be a part of the character he plays in the Netflix superhero action series The Umbrella Academy. But his announcement also highlights the streaming service’s past mishandling of trans issues with comedian Dave Chappelle.

Page transitioned between the show’s second and third seasons. It was originally thought that his character — Vanya Hargreeves, a violinist with a destructive power to control sound waves — would continue to be portrayed as a cisgender woman. However, Page revealed via Twitter that his character will be male.

“Meet Viktor Hargreeves,” Page wrote in a March 29 tweet that included a purple umbrella emoji and an image of his character. In response, Netflix’s official Twitter account re-tweeted Page’s message and wrote, “Welcome to the family, Viktor — we’re so happy to have you here” with a heart emoji.

Netflix confirmed to The AV Club that Page’s character will come out as trans and henceforth be known as Viktor, but it’s unclear how the character’s story will unfold. Fans will have to wait until the show’s season three premiere on June 22, 2022 to find out.

Page became a star through the hit 2007 film Juno, for which he got an Oscar nomination. He also appeared in the shocking drama Hard Candy, two X-Men films, and the 2010 action film Inception.

But even though Page knew he was a boy since age nine, it took the pandemic for him to transition. “There are pervasive stereotypes about masculinity and femininity that define how we’re all supposed to act, dress and speak,” he explained after coming out. “And they serve no one.”

Since coming out in December 2020, Page has used his platform to oppose Republican anti-transgender bills nationwide.

Netflix’s embrace of Page’s trans character serves as a curious counterpoint to their notorious support of transphobic comedian Dave Chappelle.

In his 2021 Netflix stand-up comedy special, The Closer, Chappelle announced he is a transgender exclusionary radical feminist (TERF) before launching into a derogatory diatribe about transgender women’s genitals.

Netflix’s co-CEO, Ted Sarandos, refused to remove the special, claiming in a company memo that Chapelle’s remarks didn’t cross any lines and that he was simply too popular to remove.

Last October, Netflix employees staged a walkout at the company’s Hollywood, California headquarters in protest of Sarandos’ decision. Contradicting employees’ claims, Chappelle said that Netflix’s LGBTQ employees never invited him to speak with them. He also made himself out to be the victim of so-called cancel culture.

Despite Chappelle’s claims of being canceled, he will host and produce four specials for the streaming service.

Conservative lawmaker comes out as transgender