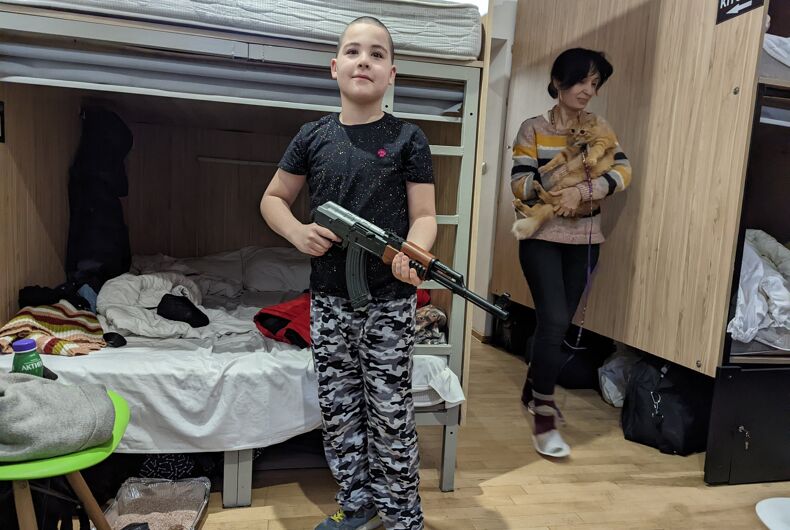 A boy poses with a gun as his mother walks by with the family cat. The two have been forced to flee their home as Russians invade Ukraine.Photo: Sarah Ashton-Cirillo

Individual pieces of corrugated cardboard had been constructed into sleeping pods. There were 14 in all, each encased in a thin, waxy layer of light and grainy faux wood. Brought about by war-time martial law, the 10pm curfew approached. The turn of every hour signified a moment pushing back against the forced normalcy of the daylight hours.

Against this ticking reminder of a nation under siege, a steady flow of displaced Ukrainians filed into the barren, sparse, and loud accommodation. The noise was a mashed together playlist of hurried phone calls, brief negotiations over a top or bottom pod, and the clanging of garbage being thrown away in one trash bin by more than a dozen different travelers. But beyond all of that, the cumulative mood was one of steady resolve and a resigned peace.

During the last days of February and throughout March 2022,  similar scenes unfolded throughout the Ukrainian city of Lviv in boutique hotels, chain lodging establishments, and individual apartments.

People, mostly women and children, came west from all over the nation. The first wave of the exodus took place in the immediate aftermath of the Russian invasion. Thereafter, different events prompted further migration, including the infamous Chernobyl power plant falling into the hands of the enemy military and rumors of the Ukrainian capital, Kyiv, verging on being encircled.

No matter the root cause, a staggering number of displaced migrants across the besieged nation journeyed west to escape the growing theaters of war. The cumulative number of those ordinary citizens, now turned into either migrants or refugees, tallies at well over three million.

For a few nights, I slept among refugees in the same compact dorms and spoke to them at train stations and on the street. Outwardly, many of them shared similar appearances. Carrying only a few bags, moving about in a harried albeit focused manner, a resolute dignity was clearly visible in how these victims of the invader’s carnage carried themselves.

One Kyiv couple with whom I spoke left behind their furniture store but not their dreams for Ukraine. They planned to stay in Lviv until the end of the war. With the husband eligible for military service, the wife wouldn’t leave him. If he was needed in the territorial defense and called to take up arms, she planned to join civilian volunteer efforts.

A few days before, another family described fleeing overnight from the same city on a grueling 15-hour journey by bus. The mother of multiple children told me she dreamed of death but now smiled because she was alive.

One tale of patriotism managed to resonate even among the battle-worn Ukrainians congregated in the dorms. A mother and son and their cat came into Lviv from the city of Sumy. They had no family in the western part of the country, but they also had no intention of emigrating to a European Union nation. Her words stuck in the night as she encouraged her son to strike a patriotic pose for my camera.

“Ukraine is my country,” she offered in a matter-of-fact manner. “I’ll only leave if the Russians kill me.”

These few stories are by no means encompassing of the millions who have been pushed from their homes, but the snapshot is indicative of the fierce patriotism and unyielding resolve of the little nation that seemingly can.