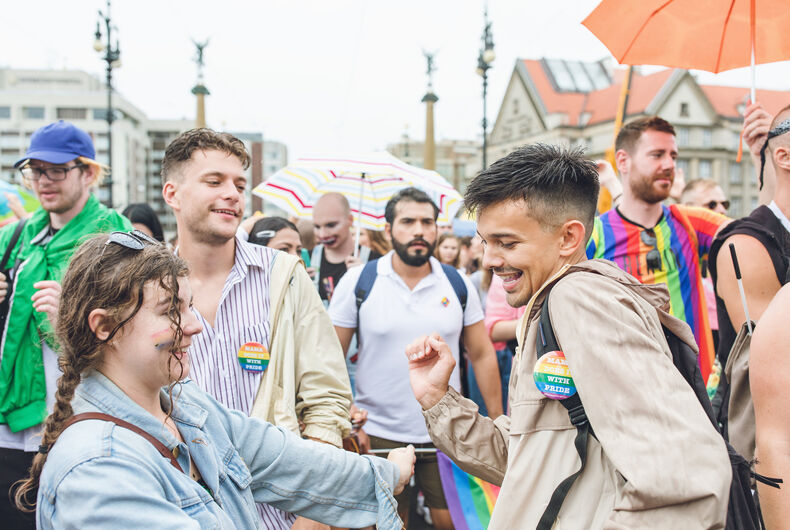 Not too long ago, the term “fag hag” was just an innocuous part of our gay and gay-adjacent lexicon. A lot of us used it to describe a certain type of woman, and we didn’t really think about its implications.

Think Margaret Cho. Liza Minnelli. Megan Mullally’s Karen from Will & Grace – these were all famous, campy, outspoken, brassy women who were surrounded constantly by gay men.

But why does it seem like the word no longer exists today? And why do some people feel like it should stay that way? Let’s unpack the term “fag hag”, along with all the stereotypes and criticisms tied to this polarizing term.

Related: Photo of the week: The queen has spoken

What Is A Fag Hag?

The term “fag hag”, by definition, describes a straight woman who tends to gravitate towards gay men. It’s a combination of two words that (more so in the past but still today) have been used to insult gay men and women. Fag = faggot, and hag = an ugly, old, or even evil-looking woman.

“Fag hag” isn’t the only term used to describe women who have a lot of gay friends. It was just the term that stuck around the most. Other, less popular, terms that mean the same thing include:

The term has sparked numerous debates in the past, particularly because of its highly offensive origins. For many self-described fag hags, using the term to describe oneself is an act of reclaiming these negative slurs that have been used to put them and their friends down. It’s a way of taking the power away from the slurs and attaching new meaning to them.

But, for others, the term is highly problematic particularly because it normalizes the use of slurs that many people could still deem deeply hurtful and offensive. It also puts into question who gets to use certain offensive words and who gets a free pass. For some gay men, the word “faggot” should never be spoken outside of gay circles, and straight, cisgender women shouldn’t be allowed to say it – much in the same way that a lot of women would find it misogynistic for a cisgender man to call women “hags”.

The stereotypical depiction of the fag hag is not exactly flattering to women. Whether in romance novels, movies, or TV shows, fag hags are usually depicted as brassy, attention-seeking, and unlucky-in-love women with a flair for drama. They’re usually seen turning to their gay best friends for comfort and validation, especially after being rejected by men.

There’s also this idea of fag hags as having this “man repeller” aesthetic. They are campy and love to wear makeup, corsets, and revealing clothes. Some may even describe them as cis women in drag. Or at least, that’s how they’re depicted in pop culture.

Along with these stereotypes come the theories as to why fag hags are the way they are. One popular theory is that some women with poor self-esteem find refuge in their gay friends because, unlike straight men, they don’t pass judgment on superficial things like looks. Gay men are not interested in women sexually, thus they supposedly can’t hurt or reject their female friends in that way.

And while a study did find positive associations between women’s feelings of sexual attractiveness and their friendships with gay men, it’s hard to say whether that’s the sole or biggest reason for the formation of these friendships.

Why We Should Retire The Fag Hag

This theory is quite limiting for both women and gay men. For one, it perpetuates the concept of the “gay best friend” as a mere accessory to a woman’s quest for love, validation, and success.

For the longest time, gay men have been depicted as either sexually depraved characters or nonsexual, non-threatening men who have no agency or lives outside of the women they’re meant to please. Just look at Sex and the City’s Sanford Blatch, Carrie Bradshaw’s perpetual GBF. Or Ugly Betty’s Marc St. James, who’s often written as sassy comic relief. In films and TV, it’s the fag hags who become the main characters, while the fags are pushed to the background, only to be brought forward for fashion advice and the funny quip.

Many gay men can attest to how this expectation to fulfill the GBF role in a woman’s life can be emotionally taxing. At its worse, it turns into a one-sided friendship where gay men are pigeonholed into playing this one-note character.

On the other hand, the concept of the fag hag reinforces harmful stereotypes about women too. It perpetuates this idea that women need external validation from men and that women’s self-worth is tied to their looks.

Essentially, the term strips both gay men and women of their agency.

Have Fag Hags All But Disappeared?

For some self-described fag hags, one huge thing that draws them to gay men (and vice versa) is this natural commonality of feeling like an outcast in a misogynistic heteropatriarchal system.

For the longest time, anyone who didn’t fall under the stereotypical understanding of what a man or a woman is supposed to be has been cast out as undesirable, unattractive, and even unworthy of love. The traditional ideal is for a woman to be submissive, meek, polite, and nurturing, and for men to be dominant, assertive, logical, tough. And so, for women who are brash, who celebrate sexuality, who are carefree, who are glamorous, there is comfort in finding refuge in gay men, who understand what it feels like to be labeled as “different”.

For gay men, a friendship with a fag hag could be mutually fulfilling. Shawn Hollenbach, the creator of New York’s Miss Fag Hag pageant, even went so far as to call fag hags “the unsung heroes of the gay world”. Fag hags were as much beards as they were intimate friends, minus the sexual tension. They were also a gateway to all things feminine. A friend with whom a gay man could explore his femininity with or try makeup, heels, drag without any of the judgment.

But has collectively deciding to ditch the term “fag hag” meant the death to relationships between gay men and straight or bisexual women?

Not really. For one, there isn’t much of a reason for gay men to turn to their female friends as beards in times of need. Acceptance of LGBTQ people is as high as ever, media representation is getting much better, and having friendships with straight men isn’t as weird as it used to be.

Plus, in the last decade, the way we talk about women and women’s issues has evolved to a point where it’s easier to have open conversations about sexism, misogyny, and body and sex-positivity – even with those outside of our communities.

While the term “fag hag” has fizzled out, the friendships remain. And instead of labeling supportive female friends as fag hags and gay besties as GBFs, we ought to just accept each other as allies, confidants, and friends.

Meet the refugees fleeing the Russian invasion of Ukraine