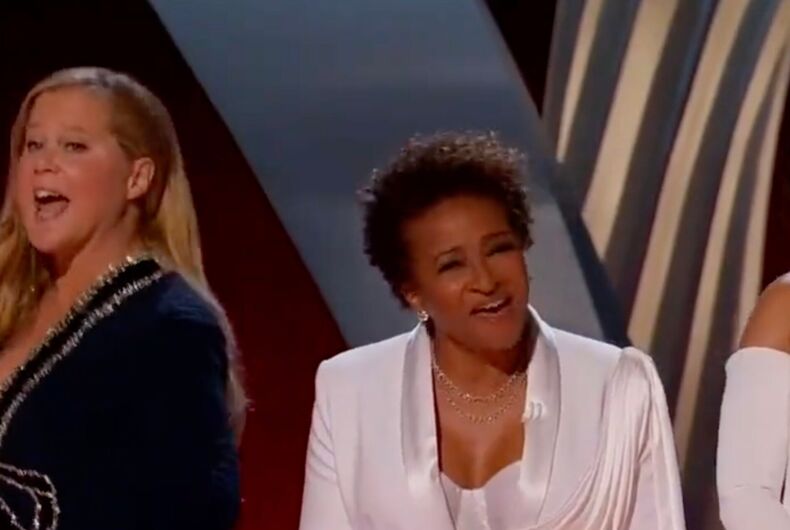 At last night’s Oscars, several celebrities used their moments on stage to speak out for LGBTQ youth.

Related: Ariana DeBose becomes first out person of color to win an Oscar in historic moment

The bill would prevent teachers from mentioning LGBTQ people in elementary schools. It has passed the state legislature, and anti-LGBTQ Gov. Ron DeSantis (R) is expected to sign it.

As applause thundered through the auditorium in response, Hall and Schumer joined Sykes in saying “gay” over and over again.

"For you people in Florida, we're gonna have a gay night."

At the end of the evening, Jessica Chastain won Best Actress for her portrayal of televangelist Tammy Faye Baker, who was known for being a friend to the LGBTQ community.

In her speech, Chastain spoke about how suicide is a leading cause of death in the United States.

“It’s touched many families, it’s touched mine,” she said, “and especially members of the LGBTQ community who oftentimes feel out of place with their peers.”

“We’re faced with discriminatory and bigoted legislation that is sweeping our country with the only goal of further dividing us. There’s violence and hate crimes being perpetuated on innocent civilians all over the world.”

She said in times like this, she is inspired by Baker’s “radical acts of love.”

“For any of you out there who do in fact feel hopeless or alone,” she added, “I just want you to know that you are unconditionally loved for the uniqueness that is you.”

And after becoming the first out LGBTQ person of color to win an Oscar when she won the award for Best Supporting Actress for her portrayal of Anita in the remake of West Side Story, Arian Debose declared, “So to anybody who’s ever questioned your identity – ever, ever, ever – or you find yourself living in the gray spaces, I promise you this: there is indeed a place for us.”