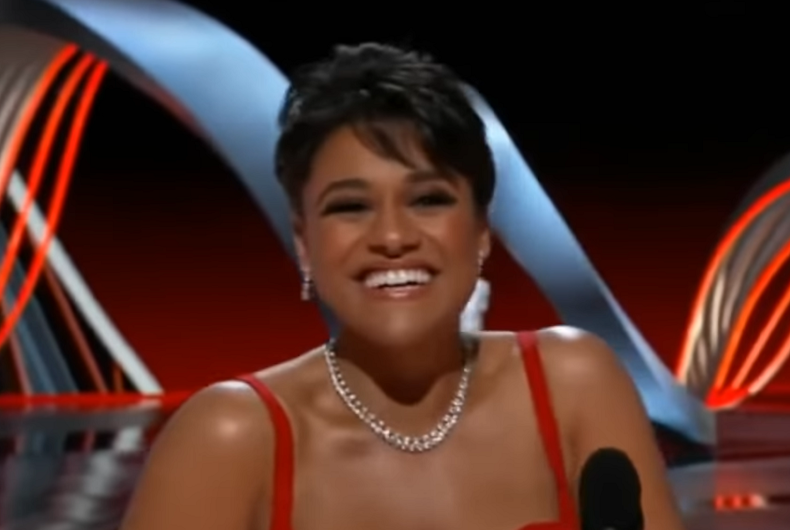 Actor Ariana DeBose delivered a heartfelt speech after becoming the first out LGBTQ person of color to win an Oscar when she won the award for Best Supporting Actress for her portrayal of Anita in the remake of West Side Story.

“Now you see why Anita says, ‘I want to be in America,’” she said, referring to the famous song from the Broadway musical and film. “Because even in this weary world that we live in, dreams do come true. And that’s really a heartening thing right now.”

“I am so grateful that your Anita paved the way for tons of Anitas like me, and I love you so much,” she said. Rita Morena, who played Anita in the 1961 film version of the play and won an Oscar for the role 60 years ago, was in the audience at the Oscars.

Then DeBose spoke to her identities and her art.

“Look into her eyes,” she said in her speech. “You see a queer, openly queer woman of color and Afro-Latina who found her strength in life through art.”

“So to anybody who’s ever questioned your identity – ever, ever, ever – or you find yourself living in the gray spaces, I promise you this: there is indeed a place for us,” she concluded.

“Ariana DeBose is an immensely talented actress and a tremendous advocate for LGBTQ people and people of color,” said GLAAD president and CEO Sarah Kate Ellis. “She not only made history tonight as the first queer woman of color to win an Oscar, but she sent a beautiful and timely message to LGBTQ young people. I hope LGBTQ youth around the world saw her win, heard her speak and recognize that they too should dream big.”

DeBose is Afro-Latina and identifies as queer. She is in a relationship with costume designer Sue Makkoo, who she thanked in her acceptance speech.