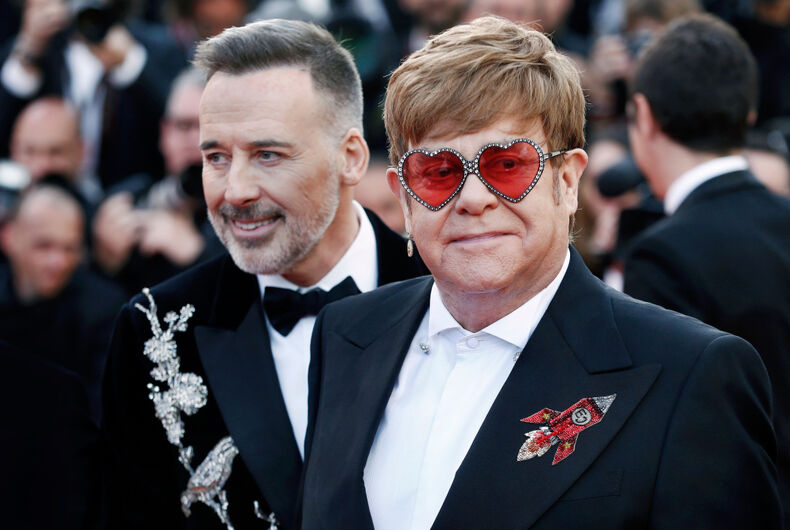 Elton John and his husband David Furnish at Cannes in 2019.Photo: Shutterstock

Elton John has revealed that he and his husband, David Furnish, were once turned down from adopting a Ukrainian orphan because they’re gay.

“I was carrying this little boy around for hours,” John explained during an appearance on Dua Lipa: At Your Service, the podcast of singer Dua Lipa. “We had a press conference at the end and they said, ‘You seem very fond of this little boy. Would you think of adopting him?’ and I went ‘I’d actually love to!’”

John went on to explain that he wasn’t allowed to adopt the child – a toddler living with HIV named Lev – due to his sexuality.

“Elton John will not be able to adopt a Ukrainian child and if he files that request we will unfortunately deny it,” said Ukrainian Family, Youth, and Sports Minister Yuriy Pavlenko at the time. “The law is the same for everybody: for a president, for a minister, for Elton John.”

News reports at the time said then 62-year-old John was also too old to adopt under Ukrainian law, which required adoptive parents to be a maximum of 45 years older than the child.

According to Equaldex, it is still not legal in Ukraine for LGBTQ people to adopt children.

It was carrying that little boy around, however, that made John realize in that moment he did want to become a dad.

The little boy, he said on the podcast, was sending him a message,

“He was saying, ‘C’mon you can be a dad,’ and that’s when we decided to have children, because of this little boy in Ukraine.”

John and Furnish now have two sons, Zachary and Elijah, who are 11- and nine-years-old. Last week, John penned a tribute to his children in Time in honor of his 75th birthday.

“Zachary and Elijah, you two are the greatest gifts I have ever been given,” he wrote. “You have filled my heart with love and my life with purpose and meaning in ways I didn’t think were possible. You are my proudest achievements, and I love you both so, so much.”