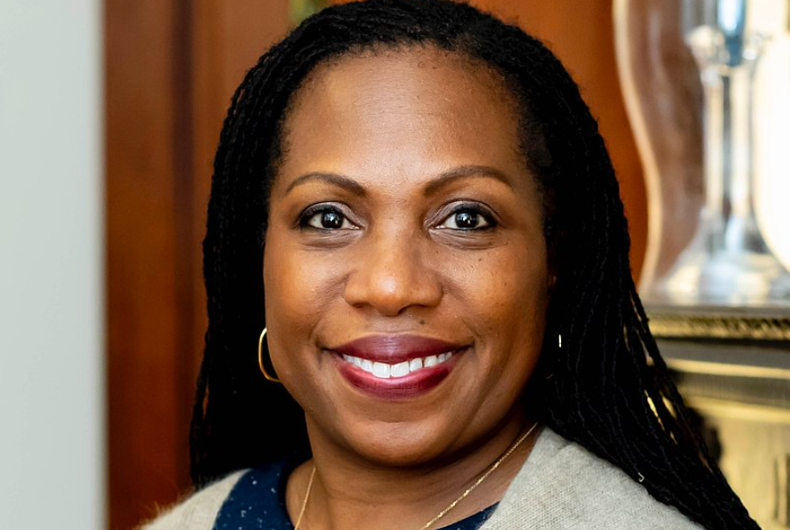 Judge Jackson, if confirmed, would be the first Black woman to serve on the Supreme Court in history. Originally a legal school of thought about how racism is institutional in the U.S. and not just a personal moral failing, “critical race theory” has become a catch-all term used by Republicans to describe any teaching about the history of racism, which they argue makes white students feel bad when they learn about it.

“You have made clear that you believe judges must consider critical race theory when deciding how to sentence criminal defendants,” the senator from Tennessee stated during her opening comments at the hearing. “Is it your personal hidden agenda to incorporate critical race theory into our legal system?”

According to Mediaite, Blackburn was probably referring to comments Judge Jackson made two years ago at a lecture where she discussed the “irony” of Thomas Jefferson writing the Declaration of Independence – replete with Age of Enlightenment ideals like individual liberty and tolerance – in an office where an enslaved person was forced to serve him.

“Thus, it is [Nikole Hannah] Jones’s provocative thesis that the America that was born in 1776 was not the perfect union that it purported to be, and that it is actually only through the hard work, struggles, and sacrifices of African Americans over the past two centuries that the United States has finally become the free nation that the Framers initially touted,” Judge Jackson said at the time.

Blackburn’s question was part of a series of questions that Jackson was not able to answer at that moment due to the format of the hearing. Other questions included whether it was Jackson’s “personal hidden agenda… to let violet criminals, cop killers, and child predators back to the streets” or to “restrict parental rights and expand government’s reach into our schools and our private family decisions.”

“Rather than defending our girls, those in power are teaching them that their voices don’t matter,” Blackburn said. “They’re being treated like second-class citizens.”

Blackburn also said that the Supreme Court should defend “parents’ constitutional right to determine what is best for their own kids.” Currently, the Republican governor of Texas is facing a legal challenge for declaring the parents of transgender minors to be child abusers if they are supportive of their children and provide access to medical care, but it’s unlikely Blackburn was referring to that, since she went on to say that parental rights are “under assault by the radical left.”

“You serve on the board of a school that teaches kindergartners, five-year-old children, that they can choose their gender and teaches them about so-called white privilege,” Blackburn said. “This school has hosted an organization called Woke Kindergarten and pushes an anti-racist education program for white families.”

Blackburn: Is it your personal hidden agenda to incorporate CRT into our legal system? pic.twitter.com/V0x3xd8EEr

Marsha Blackburn is concerned that Judge Jackson serves on the board of a school that "pushes an anti-racist education program for white families." The horror! pic.twitter.com/PPgUsU9OD2

Editor’s note: A previous version of this article incorrectly identified Blackburn as a senator from Mississippi. We regret the error.