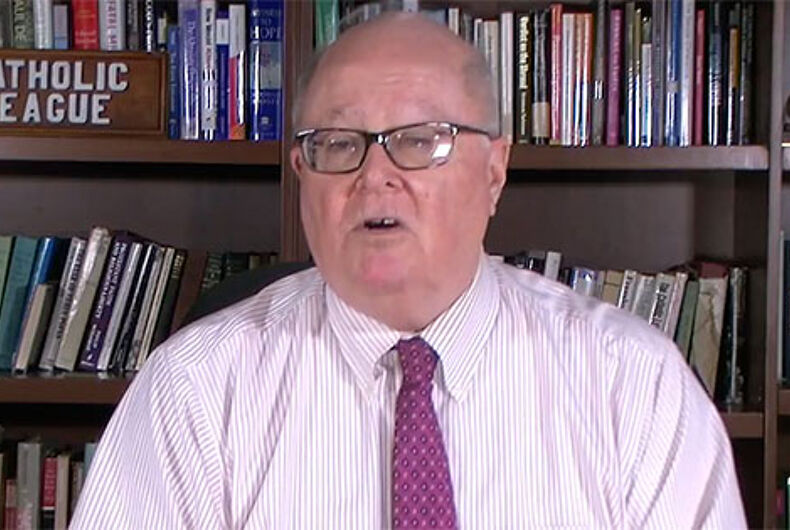 The Catholic League is an outrage-generating machine with a particular fondness for going after anything LGBTQ-related. The group attacked the Equality Act as a ruse for affirmative action and “anti-Christian.” The League pinned all the blame for the Church’s massive sexual abuse scandals on “the media cover-up of the role played by gay molesters.” As for President Biden, only the second Catholic elected to the Presidency, the League complained about his “obsession with the rights of sexual minorities is his total disinterest in the rights of Christians,”

And by League, we really mean the League’s president, Bill Donohue. As the president of the outfit, Donohue has proven to be a savvy PR operator, ready to serve up a quote on a moment’s notice and churning out an endless stream of press releases, statements, and tweets all of which have one thing in common: him. The group spends zero money on lobbying or grassroots organizing. Most of its energy is devoted to Donohue’s media visibility.

Related: Lauren Boebert made up a military rank & the internet can barely handle it

For three decades, Donohue has been the face of the Catholic League. Indeed, for all intents and purposes, he is the Catholic League. The organization claims a membership base of 350,000, although how accurate that number is is anyone’s guess. But for a group that purports to have so many members and that has reported $50 million in assets to the IRS, the League has a surprisingly small staff. Just 12 people are working at the League.

But the bigger surprise is how much of the operating budget is devoted to salaries. Out of $3.5 million in revenue, $2.2 million was spent on salaries.

And nearly half of that went directly to Donohue.

Donohue received compensation totaling $1,053,127 in salary and compensation, according to IRS filings reported by NBC News. This was a big raise for Donohue.

Except Donohue says it wasn’t a raise. He says it’s in preparation for his departure from the group at some unspecified future date. (Donohue is 74.)

“The board decided to grant me an exit compensation — I will be retiring probably in the next few years — and that is why the figure appears to double my salary,” he told NBC, disputing the characterization that he got a raise.

Unfortunately, the experts that NBC consulted thought that explanation was. a little, well, unusual.

Sarah Webber, a professor of accounting at the University of Dayton and an expert on nonprofit fraud who reviewed the organization’s 990 forms at NBC News’ request, confirmed that Donohue’s pay increases required the approval of the Catholic League’s board of directors but questioned the explanation that the raise was part of an exit package.

“‘I will be retiring probably’ certainly would not be enough for me to vote as a board member to pay out exit compensation — this sounds like it is more of a possibility than a certainty. Why would the board agree to exit compensation before the exit is planned?”

Of course, the question the League’s Board should be grappling with is succession planning. The League is so much about Donohue now that it doesn’t have a separate identity. No doubt it will be easy enough to find someone to pick up Donohue’s bullhorn of bigotry, particularly if it comes with a fat paycheck. In the meantime, we’ll just resign ourselves to watching the daily parade of outrage from Donohue as he racks up more media clips.