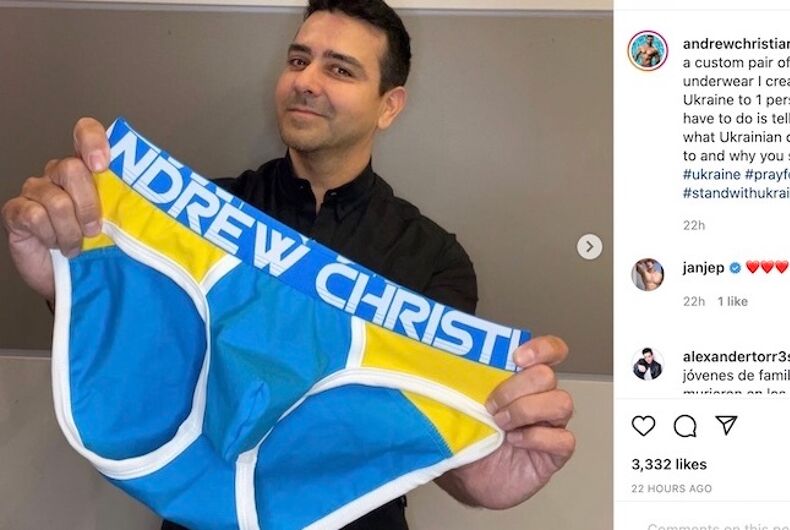 Andrew Christian, an underwear brand popular among gay men and gogo dancers, is being slammed for allegedly using the Russian invasion of Ukraine to promote their skivvies.

In a recent Instagram post, the brand’s founder posted a picture of himself holding up a pair of briefs in the blue and yellow colors of the Ukrainian flag. He announced, “I’m giving away a custom pair of autographed underwear I created in support of the Ukraine to 1 person randomly. All you have to do is tell me in the comments what Ukrainian charity you’ve donated to and why you support… 🇺🇦  #ukraine #prayforukraine #standwithukraine”.

One commenter using the handle twenty20k replied, “Wow activism at its finest,” adding, “for the record, I am pro 🇺🇦 and anti this clout post.”

Others asked when they would be producing underwear in the flag colors for Syria, Palestine, Yemen and other areas torn apart by invasion and war.

The post obviously put the brand in a tough spot. On one hand, it’s admirable that the brand sought to encourage people to share their activism in support of innocent civilians. On the other hand, hosting an undie giveaway as a way to highlight your brand during a deadly, ongoing humanitarian crisis seems tacky, no matter the underlying intentions.

When asked about the criticism by the gay adult film site The Sword, the underwear brand said, “Andrew Christian has also donated to charities that are helping Ukraine. We apologize for not making that clear in the post; however, we did not want people to think we were trying to take advantage of the unfortunate humanitarian crisis and precarious political situation by touting our own donations.”

The brand announced that since the conflict began, it made a donation to OutrightInternational.org, an LGBTQ charity helping Ukraine; Razom, a charity supporting Ukrainiane’s democratic efforts; and the Red Cross, the humanitarian aid organization.