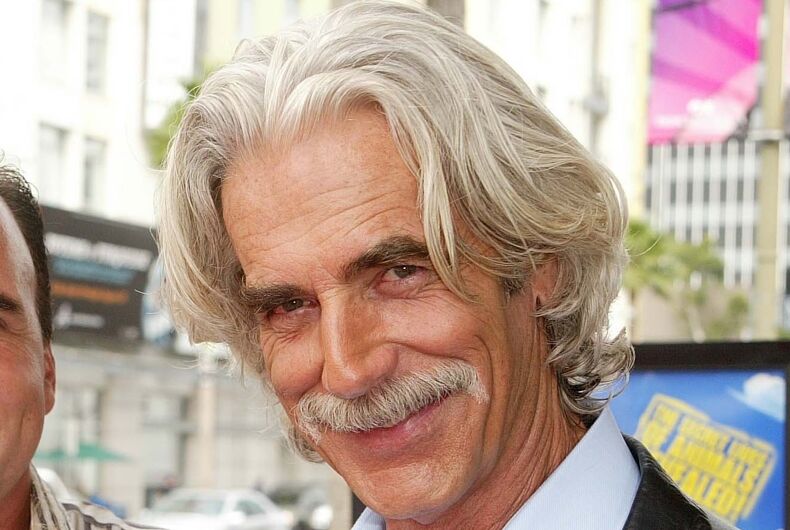 Actor Sam Elliott, a 77-year-old award-nominated actor, went on a sexist and homophobic tirade against The Power of the Dog, a 2021 Netflix Western psychological drama that has been nominated for 12 Academy Awards.

While speaking on the podcast WTF With Marc Maron, Maron asked Elliott, “Did you see Power of the Dog?”, and Elliott replied,  “Yeah, you wanna talk about that piece of s***?”

Related: A slew of LGBTQ stars & films were nominated for this year’s Oscars

Elliot then launched into his rant.

“There was a f******* full-page ad out in the LA Times, and there was a clip, and it talked about the evisceration of the American myth. And I thought ‘What the f***? What the f***?’” Elliot began. “What are all those dancers, those guys in New York that wear bowties and not much else? That’s what all these f****** cowboys in that movie looked like, running around in chaps and no shirts. There were all these allusions to homosexuality throughout the f****** movie.”

Maron replied, “I think that’s what the movie’s about.”

Maron was correct. The film takes place in 1925 Montana and shows the unsettling relationship between Phil Burbank, a menacing but closeted cowboy played by Benedict Cumberbatch, and his relationship with Peter, a seemingly gentle teenage boy played by Kodi Smit-McPhee.

Throughout the film, Phil torments Peter and his alcoholic mother while also teaching Peter about life on the frontier. Phil is the villain, but he’s also haunted by the memory of his hero, role model and “best friend” Bronco Henry. It’s later revealed that Bronco Henry once saved him from freezing to death by lying his body against Phil’s in a bedroll.

Then, speaking about the film’s New Zealand-born director Jane Campion, Elliott said, “Well, what the f*** does this woman from down there – she’s a brilliant director – know about the American west, and why the f*** did she shoot this movie in New Zealand and call it Montana? That f****** rubbed me the wrong way.”

Elliott’s rant is weird, to say the least. The film doesn’t feature a bunch of shirtless Chippendales cowboys, and it was based on Thomas Savage’s novel of the same name, a book written by a gay man about his experiences in the west. Plus, lots of movies throughout history have been films in locations that differ from their settings. Furthermore, films aren’t supposed to be mirror-reflections of reality, but rather creative re-imaginings meant to convey a mood.

A charitable interpretation might be that Elliott — who has played cowboy characters in over half a dozen movies and well over a dozen different Western TV shows  — was simply griping about his expectations of the film genre and how the film didn’t match his experience of real-life cowboys and the western U.S. landscape.

But no matter his meaning, Elliott also seems to be saying that LGBTQ people didn’t exist in the Wild West — they did — or that a foreign-born female director wasn’t able to capture a realistic western landscape. The film’s 12 Academy Award nominations seem to disagree with his cranky take.

Marc Maron: Did you see Power of the Dog, did you see that movie?
Sam Elliott: Yeah do you wanna talk about that piece of shit?
Marc: [ohh noo] You didn’t like that one?
Sam: Fuck no. pic.twitter.com/BGdOd6scwe