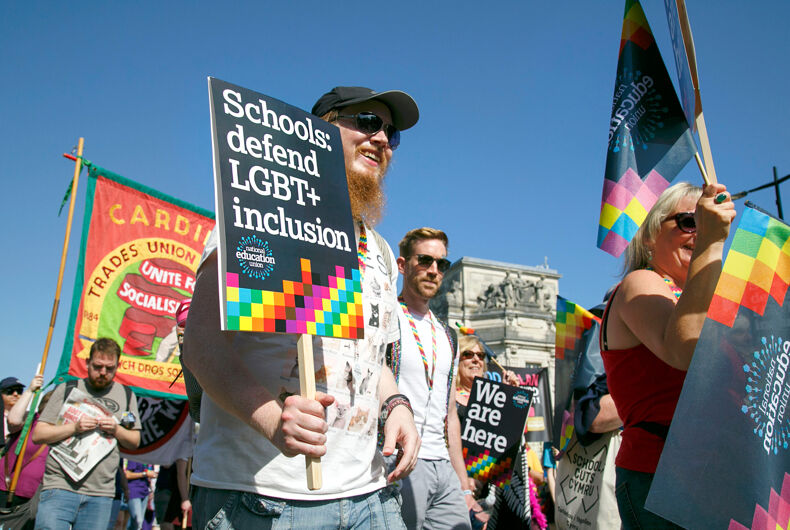 While national attention has been focused on Florida’s new “Don’t say gay” law banning elementary school teachers from mentioning LGBTQ people in class, 14 other states have introduced legislation that would either ban school discussions on LGBTQ people or allow parents to object to such discussions.

In fact, this month, South Dakota just signed into law House Bill 1012, a bill that bans public colleges and universities from requiring students and staff from “attend[ing] or [participating] in any training or orientation that teaches, advocates, acts upon, or promotes divisive concepts.” The broadly written bill could prohibit discussions on the marginalization of LGBTQ people.

Related: 5 books that should be immediately banned from schools for promoting heterosexuality

Here are the 14 other bills, what they’d do and where they currently stand in the legislative process.

Alabama – House Bill 457 would ban the use of American School Counselor Association standards in public schools. The bill’s Republican supporters say that the standards allow school counselors to “indoctrinate” students on issues such as “diversity, equity, and same-sex marriage” without the knowledge of parents. The bill is expected to die without a vote.

Arizona – House Bill 2495 would ban “sexually explicit materials” in public schools. The original bill specifically banned any depictions of “acts of homosexuality,” the phrase was removed before being introduced. Nevertheless, the bill is broadly written to ban any sexual educational materials. The bill was passed in the House and is currently under consideration by the Senate.

Georgia – Senate Bill 613 would ban any “classroom discussion of sexual orientation or gender identity in primary grade levels or in a manner that is not appropriate for the age and developmental stage of the student.” The bill is expected to die in committee.

Illinois – House Bill 5505 would allow parents to object to any lessons on sex. The broadly written bill could allow parental objections to lessons on sexual orientation or gender identity, although neither one is specifically mentioned in the bill. The bill has been referred to a committee and is expected to die in the Democrat-led legislature.

Iowa – Senate File 2024 would require parents to consent to any lessons about gender identity in grades 1 through 6. The bill was advanced by a Senate subcommittee.

Kansas – House Bill 2662 would require teachers to inform parents if any book contains “sexual content” and protect teachers who refuse to teach any lessons based on “sincerely held religious beliefs.” The bill has been approved by a House committee.

Kentucky – House Bill 14 would ban public colleges and universities from requiring students to “engage in any form of mandatory gender or sexual diversity training or counseling.” The bill has been introduced to a House committee but is considered unlikely to pass this year.

The bill would essentially make it illegal for straight and cisgender teachers to mention their gender or if they’re even married, if it ends up being enforced equally. It’s currently in a House committee.

Missouri – House Bill 1995 would allow parents to challenge any instructional materials that contradict their “beliefs related to morality, sexuality, religion, or other issues related to the well-being, education, and upbringing of such parent’s minor child.” The bill was approved by a House committee.

New Jersey – Bill S2385 would forbid public schools from presenting any lessons on diversity and inclusion, including discussions on race, gender and sexual orientation. The Republican bill is expected to die without a vote in the Democratic-led legislature.

Oklahoma – Senate Bill 1142 forbids schools from having “books that make as their primary subject the study of sex, sexual lifestyles, or sexual activity.” The bill will be considered by the Senate.

Additionally, Senate Bill 1654 would ban any boys about “lesbian, gay, bisexual, or transgender issues or recreational sexualization.” The bill has been referred to an education committee.

Rhode Island – House Bill 7138 would allow parents to object to any classroom materials based on the parents’ “beliefs regarding morality, sex, and religion or the belief that such materials are harmful.” The Republican bill is expected to die in the Democratic-led legislature.

South Carolina – Bill 4555 would allow parents to object to any classroom materials regarding “morality, sex, and religion.” The bill has been referred to the judiciary committee.

Conservative lawmaker comes out as transgender