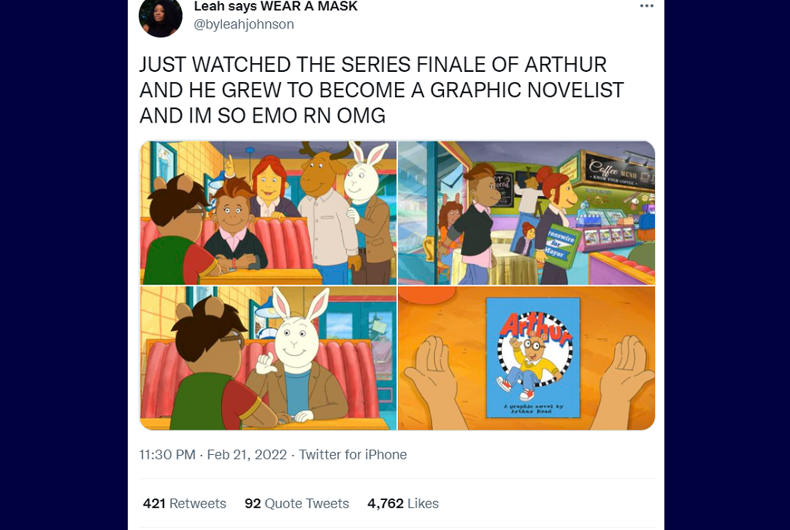 Is Francine a lesbian? One can hope!Photo: Screenshot

The long-running children’s cartoon Arthur ended this week, and the series finale showed all the characters as adults. LGBTQ Twitter was talking about Francine’s cool haircut and job as a sneaker designer.

The show didn’t actually say she grew up and came out as a lesbian, but it didn’t not say that either.

Buster became a teacher, Muffy became a politician, Francine is a cool lesbian sneaker designer (as was her destiny), DW is the feds (lmaoooo) and Binky is a weatherman 😭 I can’t believe it’s over!!!! I’m unwell!!!!!

The anti-LGBTQ former vice president got some people giggling with his criticism of the Biden administration on Ukraine, where claimed that the “weakness” of the Democrats “arouses evil” in Russia.

Of course, he was expecting everyone to just forget how much his president supported Russia’s dictator Vladimir Putin.

This meme made the rounds and it’s always a good reminder.

Today, the @WhiteHouse responded to Texas officials who labeled medical care for trans youth as “child abuse”. “No parent should face the agony of a politician standing in the way of accessing life-saving care for their child.” – @KJP46 https://t.co/6MTJBqaqSB

Someone should probably make sure all the LGBTQ+ folks (and their allies) hear how much Republicans admire Putin's policies on gay folks.

As a bonus, here’s a pup dressed up in the doggy version of Willow Pill’s iconic chaps look from last week’s episode of RuPaul’s Drag Race.

Photo of the week: The queen has spoken