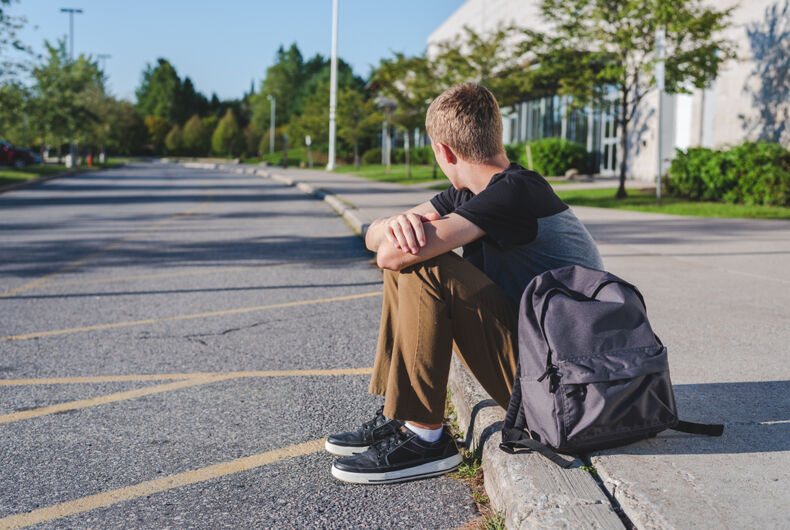 A transgender teenager says that he’s too scared to leave his home after relentless bullying at school.

Riley Rogers, 13, of Tameside, U.K. said that the attacks started this past November. In one incident, his notebook was taken from him, torn up, and thrown out the window.

Related: A trans teen was told that he would have to run for prom queen & his classmates won’t have it

In another attack, he was hit with a backpack.

But the worst was when the eighth grader, who started to socially transition when he was 11, went to an LGBTQ club meeting at his school, Denton Community College, on January 31. He went to a shopping center after the meeting and sat on a public bench when some kids from his school approached him.

The group of students allegedly grabbed his bag and destroyed it and threatened to beat him with some nearby plastic crates. Rogers believes that the assailants recorded everything on a phone.

He reported the attack to the Greater Manchester Police, but he was left “really upset” and unable to leave his home.

“I can’t really go outside anymore without anyone,” he told the Manchester Evening News. “For the past two days I’ve had to bring a teddy bear to grab onto. I’ve not been great at all. I’ve been really upset and haven’t been to school a lot.”

He also said that it makes him mad that he was attacked even though he wasn’t hurting anyone else.

“I was a little bit angry to be honest,” Rogers said. “I didn’t do anything. I was really upset.”

His mother Sarah Rogers has been supportive but says that the worst part is that the school isn’t even checking up on her son or doing anything to the alleged assailants.

“It’s been absolutely horrific if I’m being honest,” she said. “No one around checked Riley was okay. No one said to the group to leave him alone.

“I’ve watched my child be so brave dealing with people’s reactions.”

She explained that her son is “constantly getting picked on” in school.

“I’m happy knowing Riley can handle himself, but he shouldn’t have to.”