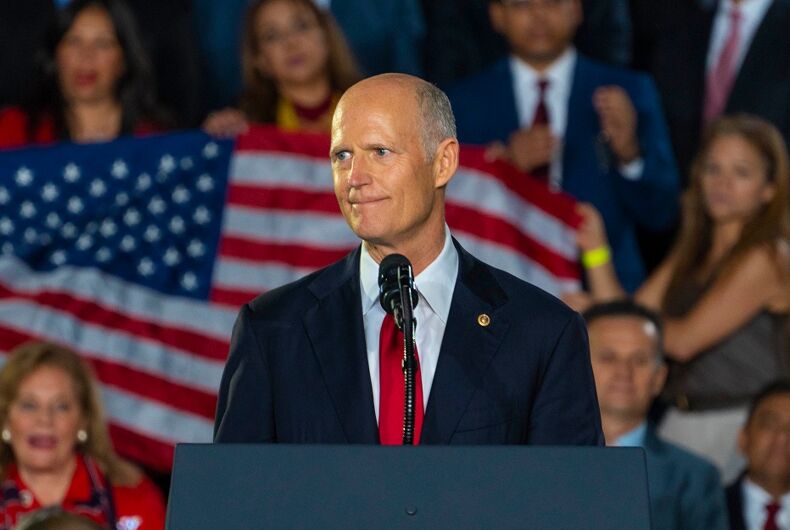 One of the hallmarks of today’s GOP is that it doesn’t care about policy. In the 2020 election, the presidential platform was simply to refer people back to the 2016 platform. There’s a good reason for that approach. Republicans have obstruction down but their ideas aren’t all that popular.

This is why Sen. Rick Scott’s (R-FL) decision to put out an 11 point manifesto, complete with a running anti-LGBTQ theme, is so surprising. The Florida Republican seems to think that putting the party’s bigotry and unpopular beliefs front and center is the ticket to winning elections.

Scott has gone full MAGA in his effort to ingratiate himself to the Trumpist wing of the party. His “11 Point Plan to Rescue America” relies a lot upon all the usual culture war themes, portraying Democrats as power-mad socialists hellbent on dividing the country by race and exterminating religion.

What exactly are the policies that Scott wants? He doesn’t want the government to collect any information about race or ethnicity. He wants to re-fund the police “because they’re the good guys.” He wants to build the border wall and name it after Trump.

But Scott also proposes a few suggestions that are clearly aimed at the LGBTQ community. Chief among them is the point where he links transgender rights with abortion.

“Men are men, women are women, and unborn babies are babies,” Scott writes. “We believe in science: Men and women are biologically different, ‘male and female He created them.’ Modern technology has confirmed that abortion takes a human life. Facts are facts, the earth is round, the sun is hot, there are two genders, and abortion stops a beating heart. To say otherwise is to deny science.”

Of course, if you wanted to make a point about science, perhaps the Bible isn’t the first book you’d quote. But it’s in line with the other attacks that Scott has lined up against LGBTQ people.

In a prelude to his points, he warns ominously that the “hour is late for America,” and cites as partial evidence, “We are allowing biological males to destroy women’s sports.”

Under his call to protect the nuclear family, he proclaims that “We will STOP Democrat [sic] Party efforts to discriminate against faith-based adoption agencies.” The reference there is to same-sex parents seeking to adopt, of course.

Similarly, Scott wants the Republican party to stop medical treatments for trans youth: “No doctor will be allowed to perform irreversible surgical or gender-altering procedures on any minor child. Once they become adults, they can do what they wish.”

Moreover, he gives religious conservatives free rein to discriminate under the guise of religious freedom.

“Americans will not be required to go against their core values and beliefs in order to conform to culture or government,” Scott writes. “Every American will be free to live out their religious convictions in the public square, not only in the home or a place of worship.”

Scott doesn’t have to spell out what this means, because it’s clear that it’s an invitation for believers to ignore nondiscrimination laws.

Scott is pushing his agenda in large part because the party leadership has opted not to push any. Normally, the party lets people know what they are voting for.

Instead, Senate Minority Leader Mitch McConnell (R-KY) has studiously avoided any hint of what the Republicans plan on doing if they take control of Congress. Asked about this last month, McConnell said, “That is a very good question. And I’ll let you know when we take it back.”

McConnell is counting on dissatisfaction with the Biden administration to do the work for him. What Scott’s agenda does is turn the spotlight on the GOP. And that’s not good for the Republicans, because the agenda is pretty unpopular. For one thing, it thinks everyone should be paying an income tax, including the very poor. That’s the very notion that helped sink Mitt Romney’s 2012 presidential bid.

Then there’s the stuff that’s just plain loopy. Scott wants all laws to expire five years after passage. His reasoning, such as it is, is that if the law is any good, it will be passed again. We would soon be a nation of lame-duck laws.

Scott isn’t a fringe character. He is a leader within the Senate GOP. As such, his manifesto is a real reflection of where the party stands. What scares his fellow Republicans is that he made it public. They would prefer to keep it quiet and just enact all 11 points silently.

Madison Cawthorn demands Republicans be made a protected class, but not LGBTQ people