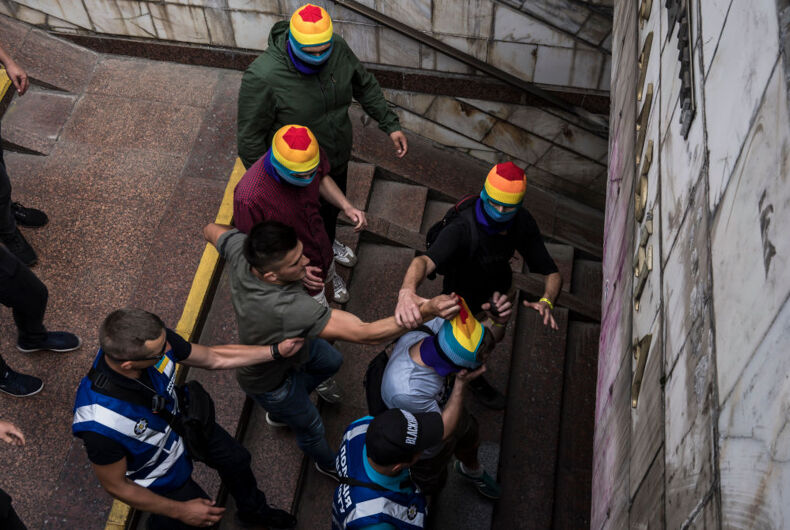 Europe is preparing for war. The war between Ukraine and Russia goes beyond its borders. It is a war between democracy and authoritarianism.

The future of the Trans-Atlantic world order is about to be decided in the coming days and weeks in Ukraine.  And the struggle for LGBTQ rights has been an inherent part of this war since its very beginning.

During the pro-European EuroMaidan protests in Kyiv in 2014, billboards appeared linking the EU with “gay propaganda.” Later, it was discovered that these billboards were sponsored by Russia.

When Russia invaded Ukraine for the first time in 2014, after the EuroMaidan revolution, the situation for LGBTQ persons became horrible. The draconian anti-LGBTQ laws of Russia were introduced after the occupation of Crimea, Donbas and Luhansk.

When I spoke with an LGBTQ activist that fled to Kyiv from the Ukrainian Nash Mir NGO in 2018. He said, “I moved from Luhansk, and recently we moved the rest of our members who were still in Luhansk, and currently they are all here in Kyiv. We are very grateful that an LGBT shelter in Kyiv welcomed us. My friend lived in this center for half a year.”

“I know a lot of people from occupied territories who used this shelter for living because when you leave all your things, your property, you came to Kyiv without anything. Because of the situation, it is virtually impossible to help persons that live in the occupied territories, unfortunately. We can help people only when they left.”

Indeed – helping LGBTQ persons in those territories is impossible. Russia’s anti-LGBTQ propaganda laws prevent any support for the community. But also, the support for these pro-Russian breakaway regions comes specifically from well-known Russian anti-LGBTQ oligarchs.

One of them is Konstantin Malofeev. The Putin ally is one of the biggest supporters of the international anti-LGBTQ network and is widely known as the oligarch behind the Russian support for the rebels in the war in Eastern Ukraine. He is on the United States’ Magnitsky Sanctions List.

Through his assistant, Alexey Komov, Malofeev has been a fierce supporter of the World Congress of Families (WCF). The World Congress of Families is a US-based organization that is uniting anti-LGBTQ voices across the world. The organization is led by Brian Brown, who’s also in charge of the National Organization for Marriage (NOM). These days, Brown has established high-level Republican contacts, as well as contacts with political and government officials in Georgia, Hungary, France, Moldova, and Poland.

Another example of anti-LGBTQ support for Ukraine’s pro-Russian separatist regions is Fabrice Sorlin. Sorlin is one of the driving forces behind the anti-marriage equality campaign in France, Mannif Pour Tous. Sorlin is, as well, the French representative at the World Congress of Families.

Sorlin’s support for Russia is not a secret. According to the Southern Poverty Law Center, he was president of a French group called the Alliance France Europe Russia (AAFER). Sorlin has lived since 2015 in Moscow with his wife and eight children.

In 2018, he also joined the anti-government “Gilets Jaunes” protests in Paris. In pictures of him during the protest, he was holding the flag of the Donetsk People’s Republic (DNR), the self-proclaimed independent pro-Russian rebel province in Ukraine recently recognized by Putin. He seems to be leading the unofficial “representation of DNR in France”.

A clash of values

The war in Ukraine is not just a military standoff. It is a clash between liberal democracy and authoritarian imperialism. Since 2014, Ukraine has been on its path towards becoming a full-fledged European democracy, and that’s Russian president Vladimir Putin’s biggest nightmare.

In an interview with the Financial Times, Putin said that “the liberal idea” had “outlived its purpose”.

“[Liberals] cannot simply dictate anything to anyone just like they have been attempting to do over the recent decades,” he said.

And he started a counteroffensive towards this so-called liberal “dictate” over a decade ago; it started before the EuroMaidan revolution in 2014. Putin’s campaign against liberal democracy started in 2008 when Russian troops invaded about 20 percent of Georgia. Georgia was, just like Ukraine Today, on its way to becoming a NATO member and getting closer to the European Union.

Around 2010, we saw an increased Russian interest in international anti-LGBTQ initiatives such as the World Congress of Families. However, the American ultraconservative organization has had links with Russia for decades. In 1995, Allan Carlson – from the Howard Centre For Family, Religion & Society – was invited to Moscow by Prof. Dr. Anatoly Antonov and Prof. Dr. Viktor Medkov of the Lomonosov Moscow State University. They invited him for his theories on “the demolition of population sizes”. After this meeting, Carlson founded the World Congress of Families

Notwithstanding this early link, the first WCF-related event in Russia only took place in 2011. After two years of organizing the ‘Demographic Summit’, the WCF decided that it was time to organize its big annual gathering in Moscow in 2014 – which they had to cancel because of the Ukraine crisis.

And finally, Leonid Reshetnikov’s Russian Institute for Strategic Studies (RISS) sent employees to the World Congress of Families and organized events in Moscow several times. Reshetnikov is a former top KGB spy and RISS is accused of plotting coup d’états in Bulgaria and Macedonia and drawing up the plans for the ‘fake news’-campaigns that helped former U.S. President Donald Trump in the White House.

The Hungarian Prime Minister Viktor Orban’s nominee for the Hungarian presidency, Katalin Novak, organized the World Congress of Families in Budapest in 2017. As Hungarian Minister for Family Affairs, she participated several times in events organized by WCF. She was responsible for many of Hungary’s recent anti-LGBTQ laws, including the introduction of the anti-LGBTQ propaganda law – which is a copy-paste of Russia’s law.

Similar connections between the World Congress of Families, Russia and the Italian Matteo Salvini and the French politician Marine Le pen exist.

Russia might have started another military offensive in Ukraine but the war with liberal democracy has been waging for much longer. Russia used infiltration and deception to spread its authoritarian imperialistic view around the world. For over a decade now, Russia’s war with the West is ongoing.

Liberal policymakers have failed to take seriously all these warning signs. We preferred trade over values. They used trade to share their values.

Rémy Bonny is the executive director of Forbidden Colours. Forbidden Colours is an organization working to prevent state-sponsored discrimination against LGBTIQ+ communities in Europe. They have worked extensively in Eastern Europe and exposed anti-LGBTIQ+ initiatives in the mainstream international media.