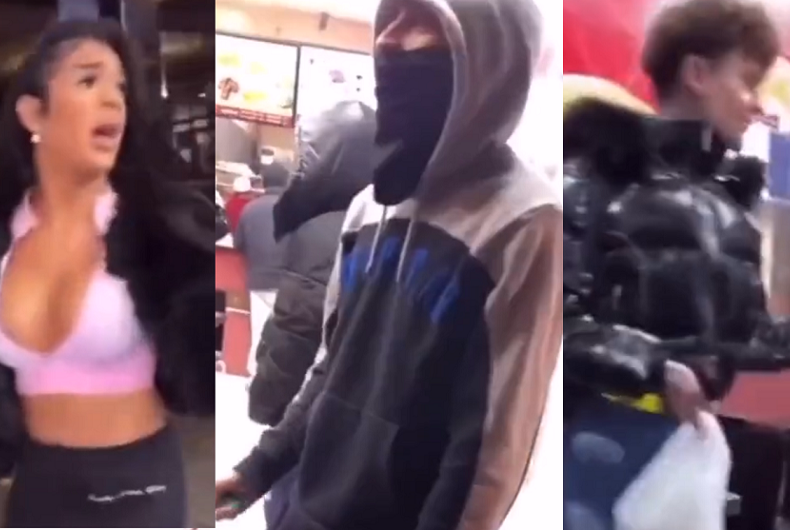 Valentino Kyriakou and Naya Martinez were just getting food when the men threatened themPhoto: Screenshot

Police are investigating an incident caught in a viral TikTok video, where a mob of men shouted insults and threatened to stab a gay man and a trans woman so that they would leave a restaurant.

Valentino Kyriakou and Naya Martinez say they’re “so, so angry” that they were the targets of hateful threats on Thursday, January 20 while getting food at a Tasty Chicken restaurant in London.

“They were calling us every name and then threatening to ‘shank’ us, which is obviously stab us in the shop, so we just had to leave without even getting all our food,” Kyriakou, 20, told the BBC.

“I literally just thought they were about to stab us. They were just going crazy – it went from one to a hundred,” he continued.

“All we were doing was standing there waiting to pick up our food.”

The video shows the men calling them “faggots” and shouting at them to leave the restaurant while Martinez tells them to “calm down.”

“Get out or I will stab you,” one of the men tells her.

As the two leave, one man says, “Don’t fucking come back here again.”

“All I felt in that moment was ‘Oh my God I am going to get touched soon, this is going to be physical,'” Martinez, 21, later said.

One of the men posted the video to TikTok, where it got shared on various social media platforms and viewed hundreds of thousands of times.

Valentino Kyriakou, 20, and Naya Martinez, 21, were subjected to homophobic slurs by a group of young men in Wembley, #London.
The video shows the friends being told that they would be "shanked" if they didn't leave.@metpoliceuk say they are trying to identify the perpetrators. pic.twitter.com/eU9BapFAos

Now the victims are speaking out to raise awareness about how prevalent hate is.

“I believe this will help others and raise awareness because in today’s society there’s so much about the LGBT community going unrecognized. And this is a massive example of that – transphobia and homophobia raw,” Kyriakou said.

“Stuff like this within London in the LGBT community happens every day,” Martinez said. “I was surprised the video went that viral and it’s getting people’s attention.”

Metropolitan Police issued a statement saying they’re aware of the video. “Inquiries are under way to identify those shown in the video,” the statement said.