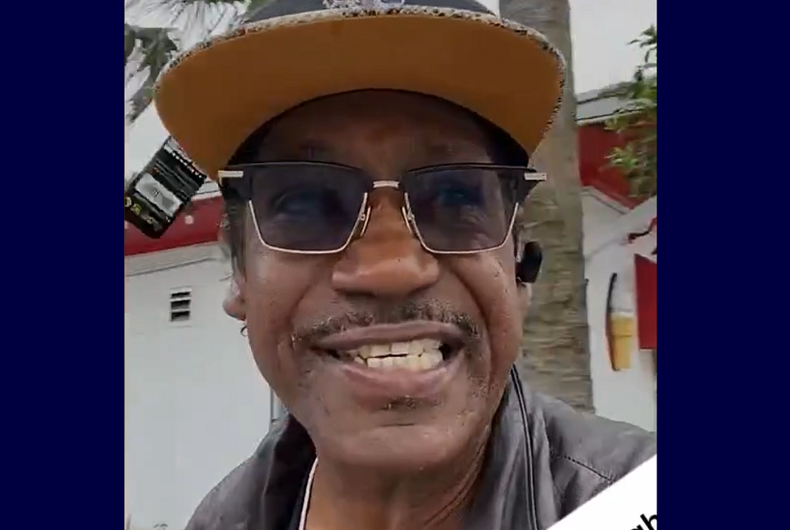 A Christian minister running for mayor of a Florida city has a bizarre campaign strategy: accuse the front-runner of wanting to turn the town into a “gay city” while calling himself a real man, over and over, like he’s not insecure about it at all.

Bishop Bernard Wright of Bernard Wright Ministries is one of four candidates seeking to replace out-going Boynton Beach, Florida Mayor Steven Grant, and he ranted about out city Commissioner Ty Penserga in a Facebook Live video.

“Ty Penserga, y’all see his big purple, pink signs?” Wright, 69, said in the video. Penserga is considered the front-runner in the election. “He’s gay. He wants to make this a gay city. That’s not Boynton culture.”

“Everywhere he looks, he’s seeing gay like it’s all right,” Wright continued. “I’ll call him what I will.”

Wright also said Penserga has a “transvestite lawyer.” Penserga is a high school teacher and doesn’t have a lawyer.

He said that he had “documented facts” but he was “not ready to divulge them” that proved that Penserga wants to have a building built in the city where only gay people would be allowed to live.

“Gay marriage came in through Obama,” Wright ranted. “That is so far away from the Scriptures it’s a shame.”

“And I’m gonna be your mayor like a man. All you gotta do is put me in there.”

Wright also mentioned Penserga’s race, saying he “looks like a great man, but he’s just an Asian student. He’s a migrant here.” Penserga’s family came to the U.S. from the Philippines when he was six-years-old and he is a U.S. citizen.

Penserga said that Wright’s comments were “bigoted, ignorant, and disgusting” and “reflect someone who is not only unfit for service but is unqualified for city leadership.”

He hopes voters will reject “the hateful, bigoted and homophobic values of my opponent,” who made him remember the people who “bullied and picked on” him as a child because of his Filipino heritage.

Wright told the Palm Beach Post that he has a First Amendment right to make hateful statements about LGBTQ people, which no one had denied.

“I don’t care about [Penserga] being upset,” Wright said. “I have freedom of speech and I’m calling shots like they are. I’m not with LGBT. I’m a minister of the gospel. I say what God says. You want to say something different, then you have it out with God.”

He added that he has “nothing against” gay people and said that his sister is a lesbian.

He even brought up his criminal record – he has three felony convictions – saying that he’s OK with gay people because he was in a “penitentiary where they’re all in there running rampant.”

It would “behoove Bishop Wright to reread the Bible,” said Rand Hoch of the Palm Beach County Human Right Council.

“It is a shame that in this day and age, a candidate for public office in Palm Beach County can be as openly anti-LGBTQ and as condescending as Bishop Bernard Wright,” he said.

The mayoral election is scheduled for March 8.