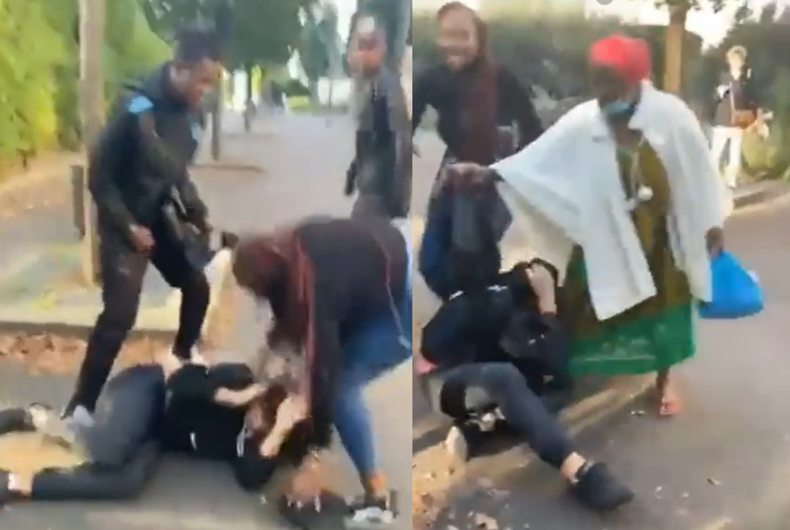 Police say that the victim was likely the victim of homophobiaPhoto: Screenshot

Video shared online shows a group of teenagers beating up a gay boy, and police say that they believe it’s a hate crime.

The video, posted yesterday to Twitter, shows a group of teenagers laughing as they beat up another teenager who’s about their age outside of a building. A man and a woman try to get them to stop beating the victim.

The video then cuts to a park where the same teen is getting beaten, and here a woman tries to stop the attackers as the person recording the video laughs.

“A young gay man gets beaten by a group of bullies in a neighborhood of Montgeron,” wrote Mehdi Aïfa on Twitter sharing the video, referring to the Parisian suburb where the attack occurred.

“An outburst so violent that even a mother and a father as well as a courageous young woman couldn’t stop it.”

“Our daily homophobia,” he concluded.

Police in Montgeron said that the video was sent to them online after Aïfa posted it to Twitter and they have opened an investigation, saying that they believe it shows a reported attack that occurred on September 30 at around 6:30 p.m.

Police received a call that day about the attack but, by the time they showed up, “Neither the victim nor the attackers nor the witnesses could be found by police. No complaint was filed.”

The 17-year-old victim reportedly talked to Le Parisien, who “confirmed” that the attack was homophobic in nature “because homophobic insults were heard.”

Montgeron Mayor Sylvie Carillon said that she is “profoundly shocked by the images of a violent and inhumane attack in Montgeron.”

“We didn’t know the facts before the video was shared online because the police, on September 30, went to where the attack happened but everyone was gone,” Carillon reiterated.