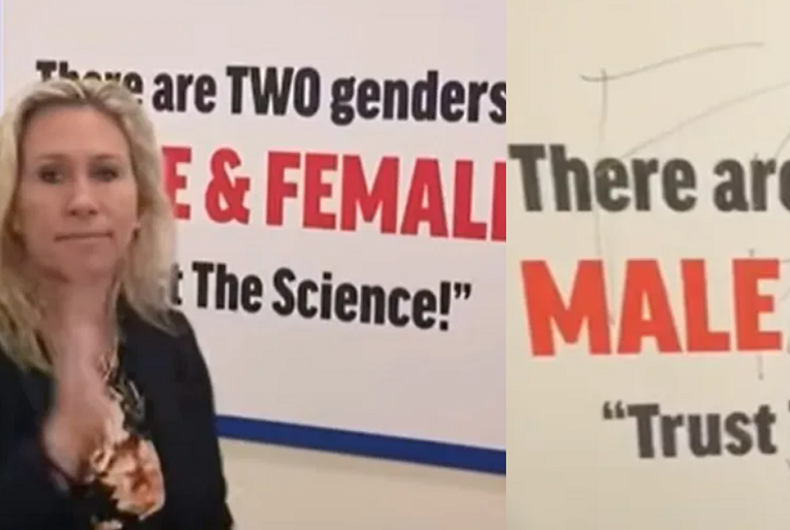 Rep. Marjorie Taylor Greene was very proud of her sign for "triggering" Democrats. Now she's mad that it's getting negative attention.Photo: Screenshots

Rep. Marjorie Taylor Greene (R-GA) is hopping mad that the anti-transgender sign she displayed outside her office in Congress got vandalized.

“This is criminal activity!” Greene said in a video she posted to the conservative social media platform Telegram. “It’s vandalism, destruction of property, so when the person gets caught they’re going to be held accountable. But here’s the scary thing — they work in our building!”

Related: Marjorie Taylor Greene is mulling a run for president in 2024

Greene said that the sign has been stolen and vandalized many times and that she’s currently on the sixth iteration. She showed the latest vandalism, which was the words “Free Palestine” written several times.

“This sign is such a trigger factor for Democrats and apparently people who actually work in my office building,” she said, even though she didn’t say how she knew it was Democratic elected officials who vandalized it and not any of the other people who go to her building. “They started vandalizing this sign, and then they stole the sign, so I’ve gone through six signs since early last year.”

She claimed, according to Raw Story, that one of the signs suffered the indignity of having a Bible verse written on it, which she said was an attack on her faith. Another sign was vandalized with the phrase, “Masks for thee and not for me,” a reference to the over $100,000 in fines Greene has racked up while working in Congress for refusing to follow its mask mandate.

Greene wants a security camera pointed at the sign “so that I can feel safe” and said that she has repeatedly asked Capitol police for it but hasn’t gotten it yet. She said she was told by the House sergeant at arms that the vandalism doesn’t rise to the level of a threat that requires more security. Greene blamed House Speaker Nancy Pelosi (D-CA) for that.

“Because if someone is this crazy, so crazy and deranged over a sign that says there are only two genders, male and female, and they keep attacking it,” she said, “then obviously they may try to attack me personally.”

Greene attacked the unknown vandals as losers and said that they proved that D.C. is “pathetic.”

“Anyways, I just wanted to give y’all a little heads up on what actually happens in Washington — and it’s loserville, loserville in Washington,” Greene said. “Absolute most pathetic place I’ve ever been in my life.”